You are here: Home / Archives for Jai Rodriguez

In fall 2012, Logo debuted a reality series called "Bad Sex."  The show title is a bit of a misnomer on the surface.  It's not some "Logo after dark" type of television programming, rather it was a cast of 10 patients who were brave enough to seek treatment for a range of sexual issues, under the direction of licensed clinical social worker and sexuality expert Chris Donaghue.  … END_OF_DOCUMENT_TOKEN_TO_BE_REPLACED

Remember when we had a style of television programming called sitcoms with trained actors and a scripted storyline written by professional writers that were filmed in front of a live studio audience? They are a rare breed yet still thriving with shows like the new sitcom "Malibu Country" that airs on Fridays at 8:30/7:30c on ABC. Jai Rodriguez, from "Queer Eye" and one of the … END_OF_DOCUMENT_TOKEN_TO_BE_REPLACED 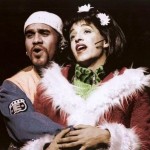 At an age when many of us are still figuring out what we'll be when we grow up, Jai Rodriguez (Facebook, Twitter) was already landing major roles in Broadway and on TV.  In this final part of my interview with Jai, we reflected on his first big breaks playing the role of Angel Dumott Schunard on award winning Broadway musical "Rent" and as one of the Fab Five on Bravo … END_OF_DOCUMENT_TOKEN_TO_BE_REPLACED

Since starting my interview series with Jai Rodriguez, I had the honor of meeting him in person at the RuPaul's Drag Race Season 4 Premiere Party.  He's super cute and super kind in person as well.  Continuing with the next installment of my interview series with Jai (see also "Interview: Executive Producer Jai Rodriguez talks about Bad Sex"), we discussed his upcoming guest … END_OF_DOCUMENT_TOKEN_TO_BE_REPLACED 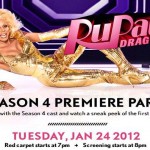 UPDATE JAN 27, 2012: Logo TV has put most of episode 1 on the Logo Facebook page. CLICK HERE to watch.  It's only online through Saturday, January 28th.  Remember episode 1 will air in its entirety on Monday, January 30, 2012 at 10/9c on Logo TV. Celebrities and "RuPaul's Drag Race" fans gathered for an exclusive party on Tuesday, January 24, 2012 at Eleven Bar & … END_OF_DOCUMENT_TOKEN_TO_BE_REPLACED