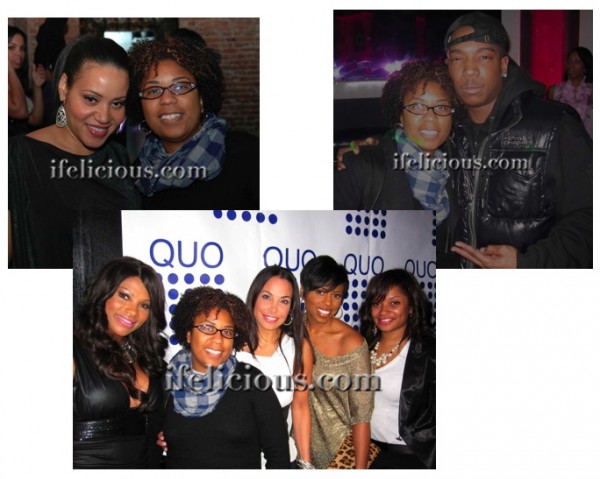 Fancy talk and folks’ self promotion aside, here’s a little look into the “Let’s Talk About Pep” Launch Party that was held on Tuesday, January 19, 2010 at Quo nightclub in NYC from my own experience.  Journal style.

I got the notice about the party on the Thursday before the event…very typical for publicists, at least the ones I have been dealing with.  That by far is always my hardest challenge.  How do I get myself on such short notice out to LA or NYC?  Can I afford it?  Will people read about it?  Will it be good for my career?  These are all questions that go through my mind.

In this case, I had started watching the show on VH1 and was really hyped about it.  I even posted a press release about it on my blog.  Plus, I’m still as giddy as I was in high school about the chance to meet Salt-n-Pepa and the rest of the cast.  Hellz ya!  I wasn’t passing this one up, and I’m glad I didn’t.

I’m getting used to red carpet coverage even though every fiber of my uber organized being can’t stand the chaos surrounding it. As opposed to LA red carpets and LA in general, there was no sprawling space for journalists and videographers to congregate.  Instead, thanks to Old Man Winter, we were crammed into a hallway inside Quo nightclub.  The walls were black, and they had those black lights in the ceiling that gave everything a purple hue.  Great if you’re trying to get your groove on; not so great if you need to get some quality shots.  I had my Nikon digital SLR and my trusty little digital camera as back up that also does video.  My hope was to switch back and forth as needed to get some one-on-one interviews or at least a few drops while making sure I got coverage of the red carpet.  Craziness, but I want as much as I can get to share with my readers.

Cheryl “Salt” Wray was the first to hit the red carpet.  She was a gem.  Everyone that was on the red carpet that night was very agreeable and patient.  Salt stayed with us for at least 20 mins taking photos, having small talk, doing on camera interviews.  Extremely approachable.  Kali “Kittie” Troy was as lively in person as she is on the show.  Sandra “Pepa” Denton was also the way I would have imagined her.  I didn’t talk to Joumana Kidd or Jacque Reid directly but they all were personable on the red carpet and inside the party.  These girls were ready to celebrate!

When the toe suckin’, “they taste like meatloaf” Markuann Smith showed up, everyone wanted an interview with him and my prime real estate on the red carpet for photographers was starting to be challenged late photographer arrivals.  I can’t help but to think that being the only woman taking photos in these moments also conjures up some entitlement in men where they feel they can nudge me out of position, complain that I’m in the way, and/or offer unsolicited advice.  Besides, many of these folks, it’s all about the money shot.  All I can say, is get there earlier then, b*tches, and this girl will nudge you right back if you try to take my golden spot.

I didn’t really know what other celebs would show up to the party besides those affiliated with the show, but Ja Rule’s face was unmistakable.  “What would I be without by baby?!?  LOL  What did surprise me was returning to the hotel to read an email from Global Grind about Ja Rule about the courts overruling some bid to not be charged with weapons possession from an incident back in 2007 (you can google it for deets, i don’t want to bring this post down with that ishh).  Shoo!  I’m sure he was ready to party that night!  😎

I took some pictures from inside the party, but I was losing my mojo being shoved around by other photogs who wanted their shot.  The best ones are the folks that cooperate and we take turns, but you only meet 1 or 2 of them at an event if you’re lucky.  If not, be ready to throw some ‘bows.  The good news is my photos went out with the official press release from the PR company that organized the event (whuddup Soulgee? 😆 ).  That was a nice little break for me, and a plan B for them.  One day, I’ll be plan A.

Hmm, just ran across this post from “The Source.”  They’re using MY PHOTOS that were sent out with the official press release and giving no photo credit-

…and I’m sure they’re not the only ones! I get it, us bloggers often just post stuff, but when I am specifically told in a press release about a photo source, I always name them.  Online world is not perfect, and neither am I in this regard, so as much as I want to be pissed, I can’t even complain.  Just a reminder to “protect ya neck.”

That’s about it.  I didn’t spend a ton of time inside the party as I normally would.  Those who know me in my personal life knew that I had been on the road for weeks at that point.  Couple that with flying in earlier that day, and I was just not feeling a party as I was some shut eye.