You are here: Home / Archives for Four Legged Pictures 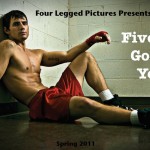 Join the Facebook fan page for Five Good Years!!! “Five Good Years” marks the first independent production for the newly-formed Four Legged Pictures and is shaping up to be one of year-end’s most auspicious enterprises.  The original, fact-inspired screenplay by Bruce Reisman and Kris Black, telling the story of a West Virginia coal miner forced into the boxing ring to save … END_OF_DOCUMENT_TOKEN_TO_BE_REPLACED

My latest trip to LA was a total knockout!  I called my fellas Bruce Reisman and Kris Black of Four Legged Pictures to see how things were going, and they invited me out to watch Black train with...wait for it...SUGAR RAY LEONARD!!!  Yes, I'm still doing cartwheels of joy in my mind not only because I was surrounded by the two hottest guys in Hollywood, but I get to break the … END_OF_DOCUMENT_TOKEN_TO_BE_REPLACED 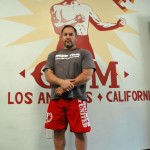 Unpretentious.  That's what I thought as I hauled my bohemian hold-it-all bag full of my journalist gear up to the address given to me for Fortune Gym.  It's a word I don't get to use often enough in Hollywood, but it also describes Australian native, former heavyweight contender, and owner, Justin Fortune.  As I walked inside, everyone was at total exertion as their gloves … END_OF_DOCUMENT_TOKEN_TO_BE_REPLACED