You are here: Home / film, documentary, theater, arts / ‘Rampart’ starring Woody Harrelson out on DVD/Blu-Ray May 15 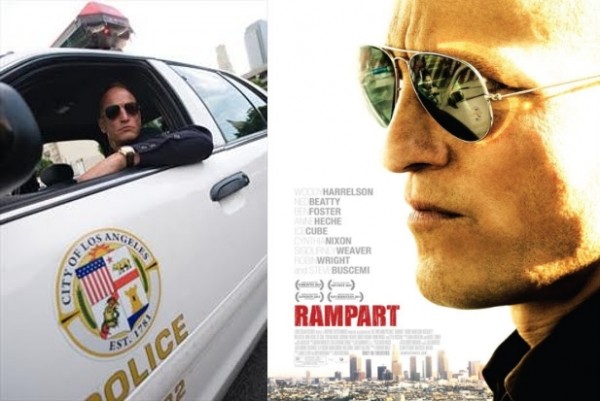 “Rampart” (purchase via Amazon) is a movie, starring Woody Harrelson, adapted from the actual LAPD Rampart scandal from the 1990s.   The film premiered at the Toronto International Film Festival in 2011 and was distributed in theaters on a limited release.  It’s time to update your Netflix queues and start stalking your closest Redbox because “Rampart” is scheduled for a DVD/Blu-Ray release on May 15, 2012 via Millenium Media.

“Rampart” was a 2011 official selection for:

Watch The Electric Playground’s Behind the Scenes video/cover story for “Rampart” – CLICK HERE.

Per the press release:

LOS ANGELES (March 21, 2012) – Two?time Academy Award® nominee, Woody Harrelson (“Hunger Games,” “The Messenger”) leads an all-star cast in the gritty drama, “Rampart” coming to Blu-ray, DVD and Combo Pack with Digital Copy May 15th from Millennium Entertainment. Officer Dave Brown (Harrelson) asserts his own code of justice, often blurring the lines between right and wrong. But when he takes it too far, he soon finds himself in a personal and emotional downward spiral internalizing his fear, anguish and paranoia as his world – complete with two ex-wives who are sisters, two daughters, an aging mentor dispensing bad advice, investigators galore, and a series of seemingly random women – starts making less and less sense.

“Rampart” was written, directed and produced by Oren Moverman (“The Messenger”) from a screenplay by James Ellroy (“L.A. Confidential”). Lawrence Inglee and Clark Peterson also served as producers.

CLICK HERE to be taken to a playlist of various video clips from “Rampart.”

At the heart of Oren Moverman’s “Rampart” is a riveting parable about what happens to a man who refuses to change, even when change is the only thing that can save him. That man is Dave Brown (Woody Harrelson). Set in the 1990s, when scandal rocked the LAPD’s Rampart division, the film hones in on a single fictional cop: Dave Brown, a man who has taken the “no guts, no glory” American mythos to heart, without questioning what it is doing to him and those he holds dear. He is a cop whose personal life is propelled into a dizzying downward spiral when he comes under suspicion for roughing up a suspect. More than just a police officer who plays things fast and loose, Brown exposes the inner workings of a certain type of personality everyone recognizes around them, a personality very much part of American culture, yet not often examined. He is the kind of man inexorably drawn to authority and power, yet seems destined to abuse it; a man who has dreams of being a great masculine hero, yet is beholden to women; who has undeniable charm, yet whose stubborn refusal to take responsibility for his actions becomes a destructive force against family, community and ultimately himself.