You are here: Home / ifelicious tv / RW/RR Challenges / MTV ‘The Challenge: Battle of the Exes’ – meet the cast, watch the trailer 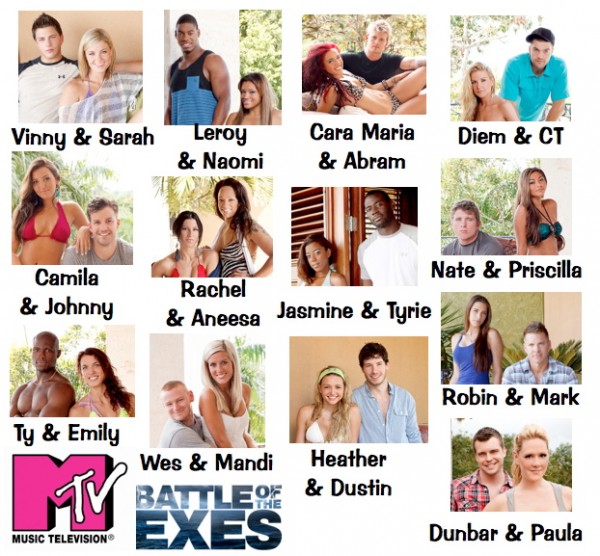 What I love about this challenge is that they’ve brought back some of the original dons that we haven’t seen in quite a few challenges.  Plus, imagine all of the drama that will undoubtedly unfold when you mix old flings, competition, and money.  I hyperventilate with excitement and am already lining up interviews with several of the cast to be posted here!

Just released today (Jan 17, 2012) as the result of over 5000 “#exes” hashtag tweets.  Read also the related article on the MTV Remote Control Blog.

Get More: The Challenge (Season 22)

Let’s meet the cast.  Thank God, “Star Slight” on AbsolutePunk.net has already saved me the heavy lifting by writing a short summary of each couple and how they’re connected.  I’m just reposting the info below and have added in their Facebook and Twitter handles.

More about “Battle of the Exes”

What happens when former lovers are reunited?…Set against the exotic backdrop of the Dominican Republic, each former lover will be partnered with their ex — as their one and only teammate for the entire game. In order to claim their share of a massive $300,000 prize, these brokenhearted exes must find a way to make their failed relationships succeed — or at least until they cross the finish line.

…Teams will do whatever it takes to avoid being sent into “The Dome” – a physically and mentally demanding elimination round. Here’s how it works: after each challenge, the team that performs the worst will automatically be sent into the dreaded ‘Dome.’ And the team that performs the best will become the Power Couple. The Power Couple will be safe from elimination and have the unprecedented advantage of casting the one and only vote for a team to face off against the worst in ‘The Dome.’ No more alliances. No more bandwagon votes. The two unlucky teams will battle it out in ‘The Dome’ for survival. The winners will remain in the game. The losers will be eliminated.” (source: MTV.com Battle of the Exes homepage)