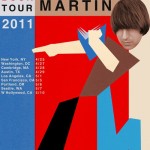 Twitter- @DemetriMartin Facebook- facebook.com/DemetriMartin Website (out of date)- demetrimartin.com I wrote about Demetri Martin about a couple of years ago on this blog- click HERE for the post.  His college meets boardroom humor, complete with a flipchart and illustrations to underscore is comic routine, just cracks me up.  Now, Demetri's releasing a book … END_OF_DOCUMENT_TOKEN_TO_BE_REPLACED

I may have missed watching this year's Super  Bowl, but I was watching on a large screen in high definition for the infamous wardrobe malfunction during Janet Jackson and Justin Timberlake's halftime performance for Super Bowl XXXVIII. Ahahaha! 8-O Hulu has once again set up AdZone with all of the 2011 Super Bowl commercials neatly cataloged.  Viewers can go to … END_OF_DOCUMENT_TOKEN_TO_BE_REPLACED