You are here: Home / Archives for Calm Before the Storm

Calm Before the Storm 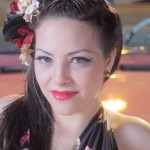 Facebook fan page- Mala Reignz Twitter- twitter.com/MalaReignz YouTube- www.youtube.com/Nickyjaaamz In a move nothing short of brilliant, Bronx's own Mala Reignz is garnering more attention than ever with the release of "Dum Da Dum (OMG)" from her latest EP "Calm Before the Storm" released on January 29, 2o10- available for free download.  The track, produced by Pyro … END_OF_DOCUMENT_TOKEN_TO_BE_REPLACED

Bronx most fierce female MC, Mala Reignz, is back with the EP "Calm Before the Storm" that was released on January 29, 2010.  I have a thing for badass chicks who have shown they can hold it down, and Mala is no exception.  Standing 4 ft 11 in tall, this tiny Latina will eat you alive and spit out our your bones with her rhymes! I've been routing for Mala since I first heard … END_OF_DOCUMENT_TOKEN_TO_BE_REPLACED