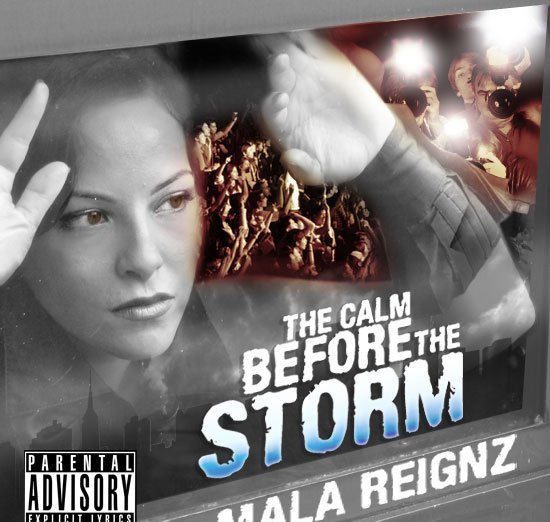 Bronx most fierce female MC, Mala Reignz, is back with the EP “Calm Before the Storm” that was released on January 29, 2010.  I have a thing for badass chicks who have shown they can hold it down, and Mala is no exception.  Standing 4 ft 11 in tall, this tiny Latina will eat you alive and spit out our your bones with her rhymes!

I’ve been routing for Mala since I first heard her music on the “Miss Rap Supreme Mixtape” (see her myspace page for the mixtape).  Check out the interview I posted about a year ago entitled “Nod your head to this: Interview with Fem-Cee Mala Reignz.”  In this interview, you’ll learn more about Mala’s life and all the ingredients that make her the strong woman she is today.

Mala has been performing at different venues in the New York area including the Digiwaxx “Go Hard or Go Home” cipher held in early December 2009.  This one was hosted by the legendary MC Lyte and showcased the area’s hottest female MCs including Mala Reignz.  Check out the video below.  Mala’s freestyle starts around 1:24 into the video.  The video is biased towards Gunna’s performance, but I think all the ladies held their own.

She was also one of the featured female MCs on The Underground Girls of Hip-Hop mixtape entitled “The Pink Carpet” hosted by DJ Vlad (see also my blog post “UndergroundGirlsOfHipHop.com releases ‘The Pink Carpet’ mixtape hostsed by DJ Vlad” …NOTE: free download link no longer active, if i find a live link to download the mixtape, i’ll update the post and this note). They also featured her as an artist. Check out the interview with her below:

Now that I’ve warmed you up, take a listen to “Calm Before the Storm” below or download it HERE.