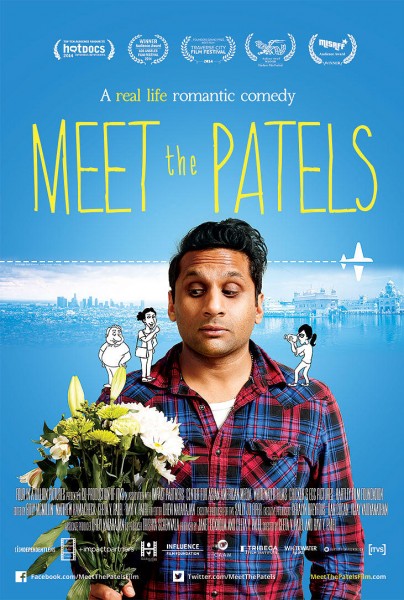 Don’t let the fact that “Meet the Patels” is a documentary conjure up some highly intellectual snooze fest that sends you running because this one is loaded with entertainment value. “Meet the Patels” features the hilarious actor Ravi Patel, who played Amir on NBC’s “The New Normal,” on a quest for true love and appease his traditional Indian parents Champa Patel and Vasant Patel who are anxious for him to get married and start a family. As with so many first generation Indian-Americans, western marital customs of love-based marriage of his American peers clash with that of eastern customs of his Indian parents who want him to have an arranged marriage. Things are complicated from the start because he has fallen in love with a redhead from Connecticut named Audrey and chose to break up with her after two years of dating and hiding it from his parents who he believed would disapprove of his relationship to a non-Indian girl. The breakup sets the stage for the documentary as Ravi spends his last year of his twenties playing out the “what if” scenario by letting his parents, who were products of an arranged marriage, take the lead on finding him a wife by Indian tradition.

We literally “Meet the Patels” on an annual family trip to Gujurat region in India where the name is from. According to Ravi’s father Vasant, the first note of protocol is that Patels marry other Patels. He even makes light of the fact that there’s a chance they could be related; however unlike in America, Patel is more representative of India’s caste system and regional significance. Ravi’s father Vasant and mother Champa create Ravi’s biodata which is a resume that, like a male peacock shows his feathers, highlights Ravi’s most marketable traits. The two have their own strategies which Champa priding herself being the matchmaker in at least a dozen arranged marriages. Over the course of the year we see Ravi explore matchmaking across the US and in India via India’s wedding season, an annual matchmaking convention, and online dating. To further complicate things, Ravi still has feelings for Audrey and is forced to gamble on his parents’ reaction despite all of their effort to find him what an Indian wife.

Filmed by Ravi’s sister Geeta Patel, the documentary contains occasional black and white animation sketches throughout to compensate for openly admitted poor filming technique. To some it may be distracting, but I found that it added to the tone of levity brought to the very real issue of clashing marital traditions.

SLIDESHOW: Photos from “Meet the Patels” at Milwaukee Film Festival

“Meet the Patels” was funded by PBS and is currently awaiting a distribution deal. For now, it is being shown in the film festival circuit. I saw it at the 2014 Milwaukee Film Festival on a night were Ravi’s parents Vasant and Champa were in attendance along with much of the extended Patel family. Vasant and Champa participated in a Q&A after the screening I saw on September 29 that contained some revelations of life after the documentary was completed.