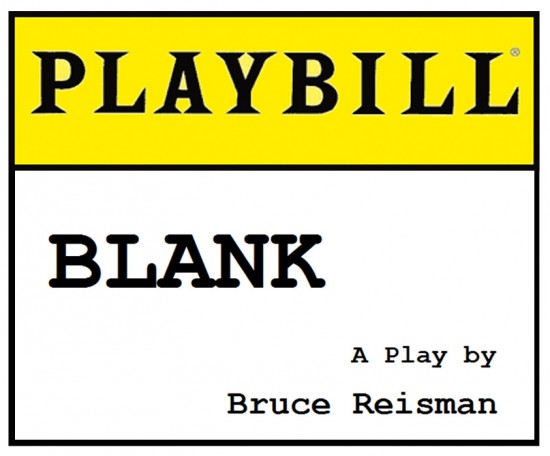 So much of Hollywood being focused on film and TV that its vibrant theater scene does not get well deserved attention. Theater is Hollywood’s hidden gem which should be no surprise considering that it is bustling with actors, writers, producers, authors, and directors. Not to be missed is the stage play “Blank,” written and directed by Bruce Reisman, at The Complex Hollywood’s Ruby Theater through Friday, March 14. Tickets are $25 and may be purchased online through BrownPaperTickets or by phone 800-838-3006.

I haven’t gotten out to Hollywood to check out the play for myself, but Bruce Reisman and I have mutually supported each other’s endeavors over the years. Once I learned backstory about how this play came to be (read more in the “About Bruce Reisman” section below) and read the first scene, “Blank” piqued my interest . When I get out to see “Blank,” I’ll be sure to get some cast photos and post a review. If you’ve seen it already, leave a comment telling me and my readership what you think.

The year is 1947, and “Blank” begins on the day Logan Wellman (Joel Bryan), an acclaimed playwright and director, checks himself out of a mental hospital and returns to his home in Long Ridge, Connecticut. Logan had been hospitalized for six months after suffering a mental breakdown and, while there, was diagnosed as bipolar. Upon his return home, Logan is visited by World War II veteran Tom Hannigan (Kris Black) who wants to turn his best-selling novel “Brenner’s War” into a Broadway play with Logan’s help. Logan’s current wife Eliza (Amy Lawhorn) discourages the endeavor but his ex-wife Hope (Donna W. Scott) is supportive. In the end, Logan takes on the project hoping to prove to himself that he hasn’t lost his touch.

Both intense and funny, Logan and Tom face personal revelations as they undergo the creative process. Together with loyal typist Charlie King (Hawk D’Onofrio), the trio lock themselves in Logan’s study- drinking heavily and working late into the night. In a moment where Logan and Tom become blocked, Charlie brings introduces his blind wife Nora (Farah Fath) whose piercing honesty sets them back on track.

“Blank” is inspired by the real-life collaboration of Broadway legend Joshua Logan and young Thomas Heggen– the tormented war veteran who wrote the classic novel and then Tony-award winning play “Mr. Roberts.” 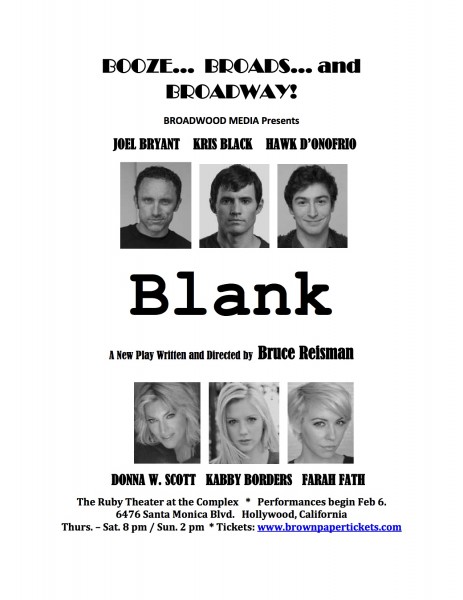 Bruce Reisman writing and producing credits include TV series such as Primetime Emmy-winning “Tour of Duty” as well as “The Fall Guy” and “TJ Hooker.” He was inducted into The National Cowboy Hall of Fame for his controversial western script for the “Requiem for a Hero” episode of the “Young Riders.” However, his true love has always been writing and directing for the stage. In a period covering 1983 to 1990, Reisman wrote and directed 10 of his own plays in Los Angeles and became an honored stalwart on the Equity-Waiver theatre scene. After a 23 year absence from the stage, Reisman’s “Blank” is his most powerful, funny, and ultimately emotional piece; written from experience, and having been mentored by the real Joshua Logan since meeting the master in 1978, and continuing their New York to Hollywood friendship by way of letters, lengthy phone calls, and several in-person visits both in the city and at Logan’s home in Long Ridge, Connecticut, “Blank” celebrates their friendship, and reveals to audiences what it takes, and took, to write a classic.