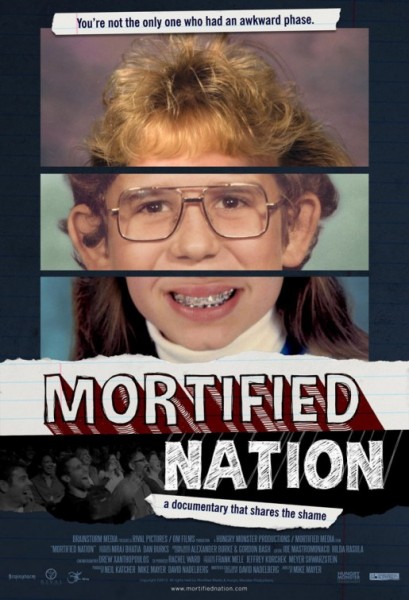 A major way that people understand themselves is through stories. We all create narratives for our lives to give our lives a sense of meaning and purpose. The general rubric for this in psychology is called identity. –Dan P. McAdams, PhD, Chair- Department of Psychology at Northwestern University in the documentary “Mortified Nation”

Hundreds of people from across the US and even abroad have scavenged their basements, attics, and closets for personal morsels of their fragile adolescence via diary entries, love letters, drawings, poetry, photographs, etc. Armed with an often humorous snapshot of their adolescent selves, they stand in front of a captive audience and read what was once forbidden aloud in a live stage series called “Mortified.” If you attend a Mortified show in LA, the Mortified After School Orchestra provides the soundtrack to those years complete with former The Cure drummer Lol Tolhurst to boot! The stage shows even spawned a celebrity edition “Mortified Sessions” that aired for two seasons on Sundance Channel and several books.

WATCH THE TRAILER FOR “MORTIFIED NATION”

What really hooks you into the documentary are the diversity of people featured. I personally fell in love with Lorelei, Tynan, Laurent, and Amber. Lorelei’s adolescent ideals of love and relationships took on the form of humorous storyboards resembling a comic strip. Tynan as a teen wrote raps about his life complete with announcing his hip hop fashion, what he ate, and a signature shout out to his homies at the end of each journal entry. A not so musically inclined Laurent pretended he was in a band named Live Evil and wrote ridiculous but age appropriately honest songs like “Blow Me” and “My Name is Vengeance.” Amber speaks of mommy issues, abuse, sexuality, and her religious upbringing; but, just as you’re deep in the throes of empathy you’re brought a sense of levity when she reads “I know how George Bush feels trying to make peace with Desert Storm and all.”

Co-producers Dave Nadelberg and Neil Katcher open themselves up to “share the shame,” too. After all, the inspiration for Mortified began with Dave’s own Mortified moment. He explained to me in an interview:

I discovered an old love letter that I wrote to a girl back when I was in high school…I was very fascinated by it. I began wondering if other people have similar things form their childhood and would be willing to share it…

On the surface they are funny. When you find these embarrassing artifacts, whether it’s a prom photo or a diary entry…If you keep looking at it and analyzing it and talking about it, you start to discover these artifacts aren’t just funny. They’re actually windows into the person you have become because you begin to see the DNA of whatever path you took in life, whatever person you grew up to be.

Neil joked of how he ultimately became a co-producer for Mortified in my interview with him, “Literally, I think the reason I got involved [at the first show] was because I had access to a camera.” Spoiler alert! Neil had his own stash of kitschy love letters; and in a moment of Mortified kismet, he met his future wife Christina at one of the shows. Neil recounted:

It was the first Doomed Valentine’s show [edition of Mortified in San Francisco]…I read in that show…Christina was there in the audience…She saw me perform and came up after the show…and introduced herself…I didn’t think anything of it…and then someone had to tell me, ‘Oh, that girl is interested in you’…We hit it off right away and started a long distance relationship between LA and San Francisco…She also eventually read in Mortified as well. She happens to have her own angry poetry. We both have this dark, angry poetry in common…I can’t tell whose is worse.

Interwoven commentary about adolescence from psychologists and authors of young adult fiction provide balance and perspective that make “Mortified Nation” more complete as a documentary film piece. If you love shows of yesteryear like “Freaks and Geeks,” “My So-Called Life,” and “The Wonder Years,” as well as current TV series such as “The Goldbergs,” “Modern Family,” and “Awkward.” then you’re sure to enjoy “Mortified Nation.”