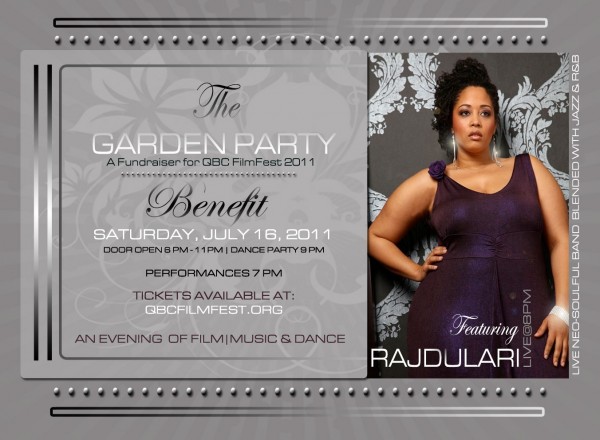 The Garden Party Benefit is the first of QBCI founder, Angel L. Brown outreach to the community for financial assistance. She aims to raise funds for the festival and continue the mission of supporting independent filmmakers of color. “I was saddened when I received the phone call, earlier this year that I will not a recipient for one of my major grants to maintain QBCI. However, I was hopeful, the five year old organization would not end due to the lack of funds.” As the call ended, Angel recalls a burst of energy coming over her, focusing on how she was going to seek funding. She was also thankful the foundation funded QBCI for the past three years. “They were one of the first funders to believe in my organization back in 2006/2007 and awarded QBCI with its first grant. I will never forget their generosity. As I move to the next phase of QBCI, I am confident the Annual Film festival will continue. I am hopeful I can bring some of year-round programming as well. I hope the community will see the importance of the festival by attending the benefit or donating.”

Featured Jazz/R&B vocalist, Rajdulari Barnes of RAJDULARI states, “Queer Black Cinema provide a necessary view into our community. We are thrilled to be lending our music and support to such a worthy organization. For me, growing up, there were no femme lesbians in mainstream media, this is why, I personally do all I can to support Queer Black Cinema. It represents me.” Davone “Bosslady” Madison, CEO/Founder of Dollhouse Enterprises Inc. states, “This benefit is especially important to me because it is a “need” in our community to showcase the work of black, queer filmmakers. Without this festival, some of us will not see “our” faces on the big screen.” Dollhouse Enterprise is a unique and exclusive group designed for professional and like-minded women with alternative lifestyles hosting distinguish safe space events throughout the city.

Industry Media Professional is expected to be in attendance including festival curators local politicians and community leaders. Long-time supporters, straight allies of QBC/advisors, Moikgantsi Kgama and Gregory Gates, Executives of Imagenation will be donating equipment. They will also be in attendance.

Donated items will be auctioned off, and a sneak peak of the upcoming “QBC Celebrates 5 Years” – Multi-media/Photo Exhibition will be displayed. QBCI Founder/Artistic Director will announce the latest news of the state of QBCI.

The night ends with music by legendary DJ MK, spinning classic house, old school R&B blended with new school R&B and hip-hop. Tickets are on sale now at www.QBCfilmfest.org for $40 advance and $50 at the door. Group discount tickets are also available by emailing tickets@qbcfilmfest.org.

If you’d like more information about QBC / THE GARDEN PARTY BENEFIT, or to schedule an interview, please call 646.389.9790 or e-mail info@qbcfilmfest.org.

CALL FOR FILMS to this year QBC film fest is currently open to both gay and straight filmmaker to submit. The deadline for submissions is July 3o, 2011. Go to qbcfilmfest.org to download the form.

QBCI is fiscally sponsored by GMAD, a 501c-3 not-for-profit. Donations can be made out to GMAD with QBC in the memo section of the check. Please mail it to QBC Film Fest P.O Box 1251 LIC, NY 11101. Donations are also accepted on line at www.QBCfilmfest.org.

QBC Film Fest, is an entity of QBCI created by Angel L. Brown-Ross in 2008 is an Avant-garde film festival that will bring you the best films about the Black LGBT experience from around the world. The three-day festival consists of showcasing the work of both gay and straight award-winning filmmakers of African descent groundbreaking films. The festival also includes industry base panel discussions and workshops, great networking social events and parties, closing with a prestigious Award ceremony, honoring officially selected film makers. This year festival takes place October 14 -16, 2011 at the Helen Mills Theater.