You are here: Home / film, documentary, theater, arts / This is Gonna Hurt the book by Nikki Sixx of Sixx AM released on hardcover today, WIN AN AUTOGRAPHED COPY!! 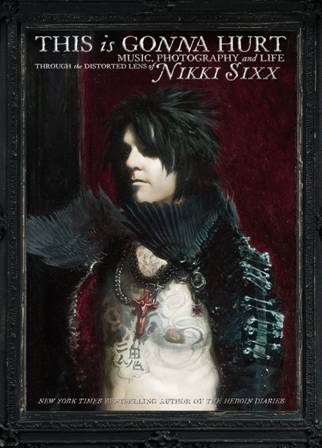 If you’ve ever been on either side of judgment, ridicule, misunderstanding, teasing, abuse, and/or neglect then you’ll want to pick up a copy of “THIS is GONNA HURT: Music, Photography and Life Through the Distorted Lens of Nikki Sixx” by Nikki Sixx of Mötley Crüe and Sixx: AM fame.  Released today, April 12, 2011 via the Harper Collins imprint William Morrow, “THIS is GONNA HURT” is a collection of original Nikki’s original photography and narrative as he explores his own life’s demons and questions our perceptions of beauty.

In celebration of the book’s release, I am giving one of my readers a copy of “THIS is GONNA HURT” autographed by Nikki Sixx.  All you have to do is leave a comment in this blog post with your definition of makes you beautiful.  Make sure to enter a valid email address so that I may contact you if you win.  In order to be entered, your comment must be posted no later than 3:00 AM PST/6:00 AM EST on THURSDAY, APRIL 14, 2011.  You may enter as many times as you like.

CONGRATULATIONS FABIAN!!! *throws confetti* *spirit fingers* I will contact you by email to arrange for your autographed copy.

This was a random drawing, but keep the comments rolling.  I’d especially like to hear if you’ve seen Nikki on his book tour, have purchased the book, and/or have been checking out the documentary series.

Along with this book, Nikki has collaborated with his Sixx:A.M. band mates DJ Ashba and James Michael to release an accompanying soundtrack with the same title due out May 3, 2011 followed by an 11 city book and album tour.  For more, read my previous blog post “Nikki Sixx debuts This is Gonna Hurt: The Documentaries on Hulu, album and book to follow.”  I just watched the first four episodes of the documentary series on Hulu and was so inspired by what Nikki, DJ Ashba, and James have compiled that I want my own copy of the book and album for my collection.

In an article released about Nikki’s project by Billboard.com in February:

Sixx describes the “This is Gonna Hurt” book as “very personal,” using his photographs as jumping-off points for essays about a variety of subjects. “It’s definitely not an autobiography,” he says. “I don’t write with an editor in mind or critique myself. It’s just me shooting from the hip. Sometimes it’s tirades and rants. Sometimes it’s very focused. Sometimes it’s very sentimental and soft and reflective. Sometimes it’s brutal in is assholeishness. It’s all my opinion, and I stand by it.”

Sixx adds that many of the photos led him to reflect on his childhood. “A lot of this photography is based around the fact my sister was institutionalized,” he acknowledges. “I realized a lot of what I’ve done my whole career was based around fulfilling this fantasy of being closer to my sister, which is pretty heavy.”

In a guest blog post on Hulu, Nikki Sixx wrote:

I have always thought the misfortunate are the fortunate, and the misfits are a better fit. But it wasn’t until I flushed it out through months and months of self-reflection in my book, and then jammed into the wee hours with James and DJ, that the questions clawing in my head got hammered into the answers.