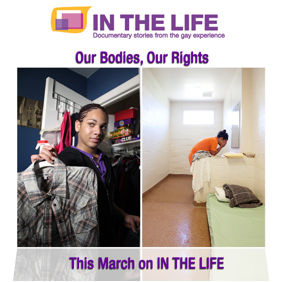 LGBT youth who go through the juvenile justice system are likely to encounter discrimination and abuse. In our lead segment, “Juvenile Injustice,” IN THE LIFE features the stories of youth in ill equipped correctional institutions and the advocates who are fighting for change. Next, young people are transcending the boundaries of gender-normative behavior more than any previous generation, but our schools continue to enforce traditional gender roles and dress codes. “Policing Gender” looks at the consequences young people face for not conforming to gender “appropriate” dress and behavior in school and at home.

When it was time to see the judge my aunt had the option of taking me back but she said, ‘No, I don’t want him.’  Which I was very grateful for because there was no way I wanted to be back with her.  I went back to my cell for another month.  – George del Rio

Our schools need to be a place where people feel like they can thrive and be who they are and be their most successful version of themselves. – Carson Kressley

“Our Bodies, Our Rights” will premiere on air and online beginning on March 1, 2011. To find out when it airs in your area or to stream or download the video, visit the In The Life Media website: www.ITLMedia.org. This episode or any other In The Life Media program can be enjoyed on your smartphone by texting DEBUT to 69866. (Standard messaging rates may apply.)