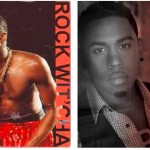 Bobby Brown's song "Rock Wit'cha" takes me back to the good ole days of Bobby Brown.  Now, "Rock Wit'cha" is being covered by Bobby V on his new album "Fly on the Wall."  I thought I'd have some fun and post both videos below.  At the end of this post is a poll for you to vote which version of the song (not the video) you prefer.  I welcome you comments as well about the … END_OF_DOCUMENT_TOKEN_TO_BE_REPLACED

I die.  Ted Williams, the homeless man with the "golden voice" is next up at Millions of Milkshakes (www.millionsofmilkshakes.com) to create a signature shake to be called The Golden Shake.  The launch will take place at the Millions of Milkshakes in West Hollywood tomorrow (Thursday, February 17, 2011).  During the first 30 days following the milkshake's launch, half of the … END_OF_DOCUMENT_TOKEN_TO_BE_REPLACED