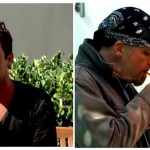 Cast mates Jason Wahler and Leif Garrett from VH1's "Celebrity Rehab with Dr. Drew" that airs its season 4 finale on January 19, 2011 have been talking to the press lately about their experiences on the show.  Jason claims that the show's producers wanted him to drink, and Leif says that the show's producers pressured him to use drugs.  Both said it was all about getting … END_OF_DOCUMENT_TOKEN_TO_BE_REPLACED