You are here: Home / ifelicious tv / Sandra ‘Pepa’ Denton and three of her closest friends search for Mr. Right in the Big Apple 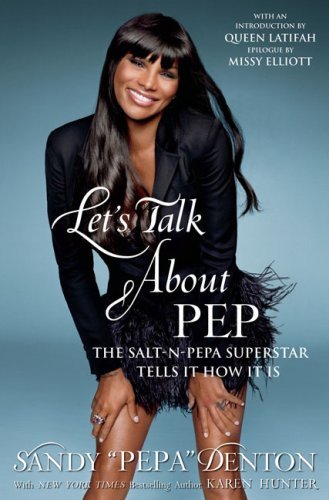 SANTA MONICA, Calif., Jan. 5 /PRNewswire/ — “Let’s Talk About Pep” is a real-life comedy following Sandra “Pepa” Denton of Salt-n-Pepa fame as she emerges from an over four-year romantic and sexual sabbatical to search for love again.

After being burned by bad boys one too many times, Pep decided to get out of the game for a while. She thought maybe clearing her head and going celibate would cause “The One” to magically appear. Guess what? It didn’t! Now Pep is joining forces with three of her closest girlfriends — all single and searching, too — to try the dating scene again. Together the four friends will laugh, cry and dish lots of dirt as they all try to find true love.

VH1’s new original series, “Let’s Talk About Pep” is set to premiere Monday, January 11th at 10:30PM ET/PT. We’ll get to know Pepa’s partners in crime: TV personality and journalist Jacque Reid, who’s entertaining the notion of trying motherhood alone until Mr. Right comes along; Joumana Kidd, former model and sports journalist, now returning to the dating scene after her highly-publicized divorce from basketball superstar Jason Kidd; and the wild child of the bunch, voice-over artist and radio personality Kali Troy (a.k.a. “Kittie”), on the hunt for a man who’s man enough to keep up with her.

While potential suitors range in age and occupation, the ladies are at a similar place in their lives: All have achieved success in their professional ventures but lack that partner to share it with. Of course they each have very different strategies for finding the perfect guy. But “Let’s Talk About Pep” isn’t just about the dating game — it’s about the ties that bind these girlfriends together. No matter how they fare in sex and romance, they’ve always got each other.

VH1 connects viewers to the music, artists and pop culture that matter to them most with TV series, specials, live events, exclusive online content and public affairs initiatives. VH1 is available in 95 million households in the U.S. VH1 also has an array of digital channels and services including VH1Classic, VH1 Soul, VH1 Mobile, VH1Games and extensive broadband video on VH1.com. Connect with VH1 at VH1.com.