You are here: Home / ifelicious commentary / The 2009 FOX Reality Channel Really Awards Official After Party at Area Nightclub on Oct 13, 2009 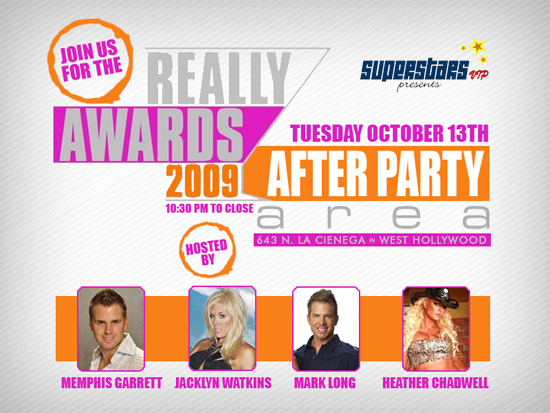 The “Really Awards” is the only award show that celebrates all of the outrageous moments and personalities that reality TV has produced over the year. It’s simply a celebration of the best in reality Television! This year’s award show will be hosted by Actress Vivica A. Fox, best known for her roles in films such as Kill Bill: Vol. 1, Independence Day and Set It Off, and a veteran reality television star in her own right, appearing as a contestant on ABC’s Dancing with the Stars (Season 3) and host of VH1’s Glam God with Vivica A. Fox and TV Land’s The Cougar and singer, actor, producer Lance Bass, who gained fame as a member of the multi-platinum selling group, ‘NSYNC, will host the red carpet show, bringing viewers up-close and personal to their favorite reality stars. Bass, a reality fan and producer himself has been in the reality spotlight before as a contestant on Dancing with the Stars (Season 7) and appearing on Bravo’s Kathy Griffin: My Life on the D-List.

This is a upscale dress occasion.

We look forward to seeing you there!

The FOX Really Awards will air on Saturday, October 17, 2009. Watch the preview below: