You are here: Home / ifelicious tv / In The Life / October 2009- *Season Premiere* In The Life episode “Living on the Margins”

IN THE LIFEs 18th Season premieres this October with a slate of timely and provocative episodes, including a look at LGBT activist organizations, including Queers For Economic Justice, that work to challenge racial and economic injustice; a special presentation of Preachers Sons, a stirring documentary about gay adoption; a report on the recent advances and setbacks in the development of an effective AIDS vaccine; and a profile of progressive faith leaders using religious arguments to advance marriage equality.

“Living On The Margins” 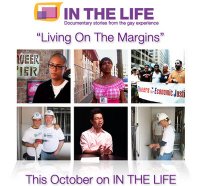 40 years after the Stonewall uprising, the LGBT movement is more visible than ever. But many queer people who do not conform to the image of gender, race and class most pervasive in the media, remain largely invisible—even to the movement. This month, we look at how LGBT people living on the economic margins of our society are organizing themselves to find housing, improve their professional skills, and obtain employment and health care.

The Unseen Gays: Struggling on the Margins

At a time when nearly every corner of the country is suffering from market downturns and high unemployment rates, many in the LGBT community are especially hard hit. In our lead segment, we look at how racial, economic and gender-based discrimination result in disproportionate rates of poverty, unemployment and homelessness among the most marginalized members of our community.

For many LGBT people, the recent economic crisis reinvigorated the spirit of volunteerism. At Habitat for Humanity’s first LGBT Unity Build Day, we speak with the community members who came out in support of affordable housing while raising visibility for the movement.

“Living On The Margins” will begin airing October 1st and be available for free video streaming and downloadable podcasts from the IN THE LIFE website on October 2nd. To find out when it will air in your local area, to stream or download it, go to www.inthelifetv.org.