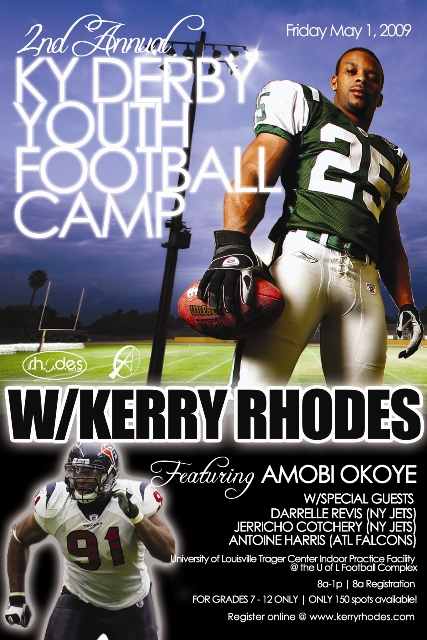 Louisville, KY – April 24, 2009 – Kerry Rhodes (NY Jets) and Amobi Okoye (Houston Texans) revisit another year of great events in support of the children, in Louisville, KY home of the prestigious Kentucky Derby for their 2nd Annual KY Derby Youth Football Camp & Celebrity Basketball Game. Kerry and Amobi, University of Louisville alum felt there was a need to give back through their foundations to the youth of Louisville. While all of the parents and adults can enjoy the festivities of the KY Derby week, there was a minimal amount of activities for children; therefore Kerry and Amobi felt a need to fill that void. Also, joining them this year, Darrelle Revis (NY Jets), Jerricho Cotchery (NY Jets) and Antoine Harris (ATL Falcons), a University of Louisville alum as well, who will participate in the football camp and provide the children with an environment of icons. The youth camp, which will be held at the U of L Trager Center Indoor Football Practice Facility, has proven to help young men strive for their dreams and work harder to accomplish those dreams.

Kerry and Amobi’s mission for the annual football camp is to empower and provide the opportunity to learn sportsmanship, teamwork, the basics of the game, and give young men optimism on their education and skills with the confidence they need to go to the next level. The camp will be conducted by the renowned Byron Williams (NFL Retiree), founder of BW Sports, LLC known throughout the country as the “one and only” true football camp and training given by his team who provides first class, second to none motivation and are also committed to the community and giving an opportunity for all youth to perform to the best of their abilities through his premier “Football Mini Camp,” program.

ABOUT THE KERRY RHODES FOUNDATION 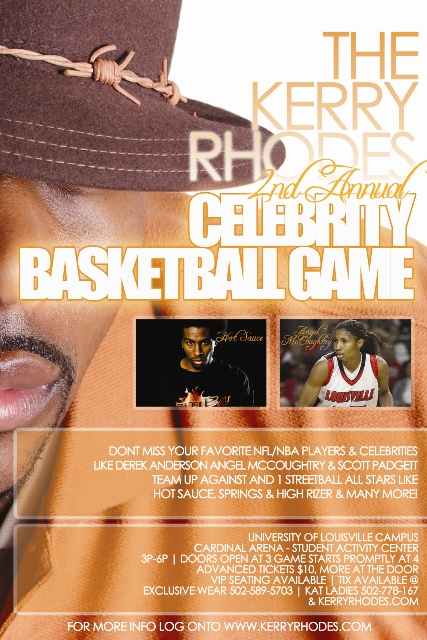 The KERRY RHODES Foundation is a non-profit organization which was founded in 2006 by NFL New York Jets star Kerry Rhodes as a financial source and outlet that affords young men and women as well as educational facilities the financial backing enabling them to educate and support students to continue striving towards embracing dreams that endear them to further themselves educationally. The foundation is set to encourage today’s youth to reach for their dreams and provide young ambitious men and women with the armaments to conquer adversity. Reaffirming Hopes Of Dream Endearing Scholars is indeed one way that our community can continue propelling talented and fearless young men and women towards attaining and maintaining successful destinations in our society. Moreover, Kerry’s firm belief in the necessity of educating young minds in sound and well-equipped educational facilities is also the driving force behind the creation of the entities charitable efforts. The charity’s mission is twofold. The organization uses its resources to support the maintenance of high school facilities throughout the country while also assisting young men and women birthed from these institutions to further themselves educationally by providing them with scholarships that serves to reaffirm the bold steps taken by those who dare to dream.

ABOUT THE AMOBI OKOYE FOUNDATION
Amobi Okoye Foundation provides hope to kids and communities through a series of programs and services designed to mentor youth and young adults; mitigate childhood obesity and build stronger communities around the globe. Amobi Okoye Foundation is established on the belief that every child has the basic human right to learn and play in a safe and nurturing environment. AO Foundation global effort, “C.A.T.E” (Changing Africa Through Education) provides education scholarships; funds the building of clean water wells; and supports healthcare initiatives in developing parts of Nigeria.