You are here: Home / Archives for Pandora Boxx 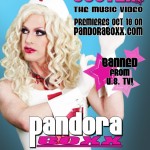 I don't think I can say "cooter" without laughing like an 8th grader in sex ed class, but Pandora Boxx from season 2 of "RuPaul's Drag Race" has made the name into a hit single that's too hot for US television!  Check out the press release below: Television drag star Pandora Boxx’s “Cooter!” is simply too much to handle and has been banned from U.S. television. Reasons are … END_OF_DOCUMENT_TOKEN_TO_BE_REPLACED