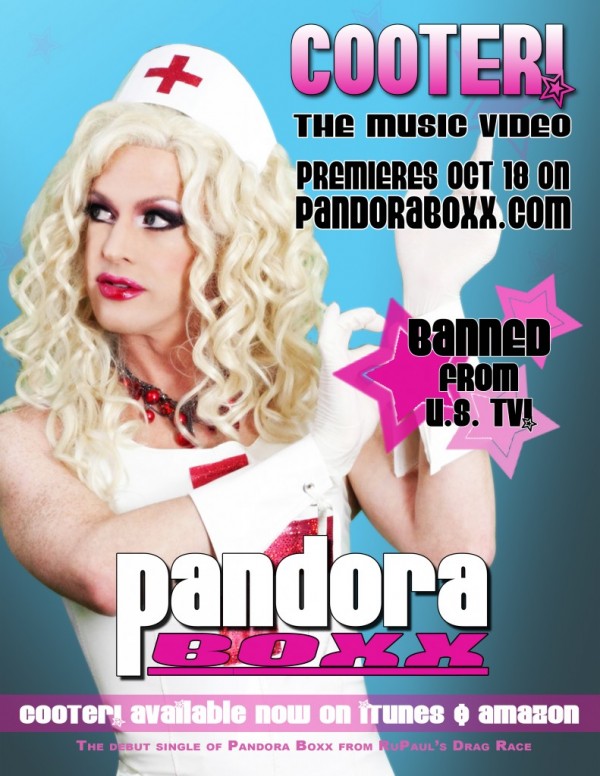 I don’t think I can say “cooter” without laughing like an 8th grader in sex ed class, but Pandora Boxx from season 2 of “RuPaul’s Drag Race” has made the name into a hit single that’s too hot for US television!  Check out the press release below:

Television drag star Pandora Boxx’s “Cooter!” is simply too much to handle and has been banned from U.S. television. Reasons are still unclear as to what blacklisted the video. Sources at Pandora’s camp indicate it may have been a number of factors that put it beyond the threshold of a few edits in order to meet TV standards. The too-scandalous-for-TV music video will be unleashed for the world to see exclusively on Tuesday, October 18, at 9:00 p.m. PDT/Midnight EDT, on Pandora’s official website.

Pandora’s debut single “Cooter!” made a splash on industry charts when it dropped on September 27, skyrocketing to #2 on Amazon’s Dance Pop Hot New Releases Chart and #56 on iTune’s Dance Singles Chart. Pandora is embarking on a tour October 12 that will land in over one hundred cities across the United States, Canada, Australia, and Europe throughout 2011-2012. Select dates have already been announced, including stops in Boston, Chicago, Los Angeles, Tacoma, St. Petersburg, and Darwin, Australia.

Pandora’s Cooter! Tour will feature stand-up comedy and songs that share her crazy stories of international drag stardom, unusual encounters on tour, and what it’s really like being Pandora Boxx.  Much like the infamous box Pandora is named for, you will never know what to expect.

Pandora’s fans (self-dubbed “Fandoras”) have flocked online to support the drag superstar’s release, praising the song as “hilarious on-spot humor…” with “perfect timing.” And it’s no secret that Pandora loves entertaining the masses with her distinct sarcasm and witty humor. She says, “I am beyond
thrilled that people have responded so well to my first single, and I can’t wait for my Fandoras to see the video. I will admit I peed a little when I heard the news it was already banned from U.S. television.” And Pandora’s excitement goes beyond her Cooter! “My tour will be the best show I’ve
done in my whole career. It’s something I’ve been working on for a very long time.”