You are here: Home / Archives for King of Anything 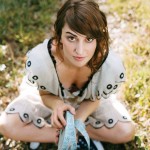 Official website- www.sarabmusic.com Twitter- twitter.com/sarabareilles I was such a fan of Sara Bareilles's debut album "Little Voice" that I can't wait to hear this new single as well as her next album set to release sometime in September 2010.  ~Ifelicious NEW YORK, May 3, 2010 (PRNewswire) -- Epic Records recording artist, Sara Bareilles is pleased to announce the … END_OF_DOCUMENT_TOKEN_TO_BE_REPLACED