You are here: Home / Archives for Jordan Wisely 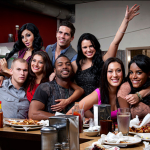 First of all, I know MTV's "The Challenge: Rivals II" has already filmed, cast revealed, and we'll be watching beginning July 10, 2013. I just wanted to pause and write this blog post since "The Real World: Portland" just ended, and I have my own thoughts on who I'd like to see on future Challenges. By golly, it's virtually the only reason I struggle through seasons of "The … END_OF_DOCUMENT_TOKEN_TO_BE_REPLACED