You are here: Home / Archives for James Lipton 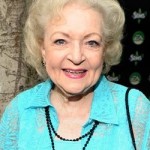 I'm so mad I missed Betty White yesterday on Bravo's "Inside the Actors Studio." Hopefully, it will air again. From the Bravo's press release: Charming audiences for over seventy years on programs like "The Mary Tyler Moore Show" and "The Golden Girls," the Illinois native has been nominated for over 20 Emmy Awards and has won seven. White, an honorary "Mayor of … END_OF_DOCUMENT_TOKEN_TO_BE_REPLACED