You are here: Home / Archives for church lady 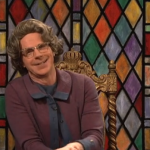 True Entertainment, the producers behind successful reality series such as Bravo TV's "The Real Housewives of Atlanta," Logo TV's "The A-List: New York" and "The A-List: Dallas" are back at it again with a show about Atlanta's preacher wives to air on TLC.  Taping has not yet begun, and it's anticipated that the show will premiere in late 2012.  See the press release … END_OF_DOCUMENT_TOKEN_TO_BE_REPLACED