You are here: Home / Archives for Billy Joel: The Life and Times of an Angry Young Man

Billy Joel: The Life and Times of an Angry Young Man 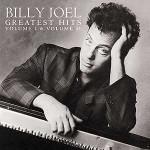 September 10 is World Suicide Prevention Day, and I wanted to big a Throwback Friday post that addressed the issue of suicide.  I picked Billy Joel's "You're Only Human (Second Chance)" because he cleverly took a serious topic and managed to make an upbeat sounding track about it.  The song was written to address teenage suicide, something that is a matter of his own heart as … END_OF_DOCUMENT_TOKEN_TO_BE_REPLACED