You are here: Home / Archives for Atlantic City 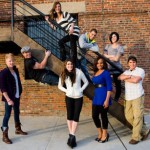 This is the first season that I haven't spent time commenting on the Real World, but this season is a drag to me (no pun intended).  I wish they had a job together like they've been doing on more recent seasons.  At least it forces them to interact with each other collectively.  This season it seems like they're all on their own agendas, and it's just boring.  Even the addition … END_OF_DOCUMENT_TOKEN_TO_BE_REPLACED