You are here: Home / Archives for 30 year anniversary 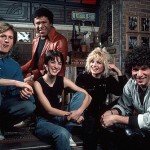 I just wonder why MTV isn't doing this tribute on their channel? Maybe not the 3-day version, but even a 24 hour tribute would be appropriate for their 30 year anniversary. Either way, this should be something to watch! ~Ifelicious (New York, NY) July 20, 2011 – VH1 Classic is airing “MTV30 On VH1 Classic,” a three day tribute to MTV beginning Saturday, July 30 at 6AM to … END_OF_DOCUMENT_TOKEN_TO_BE_REPLACED