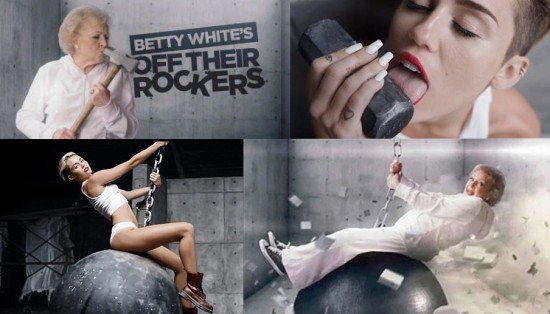 If you’re wondering if the Miley Cyrus VMA performance and subsequent nudity laden “Wrecking Ball” video release buzz has run its course, the answer is abso-frickin-lutely not! The latest homage to Miley came from Hollywood’s 91-year old, senior darling Betty White who is promoting the return of her hidden camera prank show “Betty White’s Off Their Rockers” to Lifetime. NBC cancelled the show, that was nominated for 2 Primetime Emmys, earlier this year after airing for 2 seasons. Lifetime purchased syndication of the earlier seasons and plans to premiere a brand new season in 2014.

Mission accomplished, Betty White and show producers, because this promo video has gone viral and generated interest in a show that people like myself hadn’t heard of or watched before. I’m kind of over “Candid Camera” and “Punk’d” type shows, but the twist of having the senior citizens as the pranksters on unsuspecting victims sounds exceptionally fun and entertaining. I’m going to DVR a few old episodes just to check it out.

The “Betty White’s Off Their Rockers” new season promo is chock-full of Miley-isms from her “Wrecking Ball” video and 2013 MTV VMA performance. Over the course of 30 seconds, Betty White swings from a wrecking ball, licks a sledgehammer, and waves a foam finger. You HAVE to the see the video for yourself! Watch below or CLICK HERE.