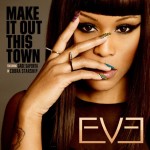 Following on the heels of "She Bad Bad," EVE releases an inspirational track featuring Cobra Starship's front-man Gabe Saporta called "Make It Out This Town." The official video premiered on March 29, 2013 on VEVO, and the single has been available for download via iTunes since March 5, 2013.  EVE works as a celebrity ambassador for the Big Brothers Big Sisters organization. In … END_OF_DOCUMENT_TOKEN_TO_BE_REPLACED