You are here: Home / Beauty/Fashion / T.I. to showcase his Akoo clothing line on ‘T.I. and Tiny: The Family Hustle’ 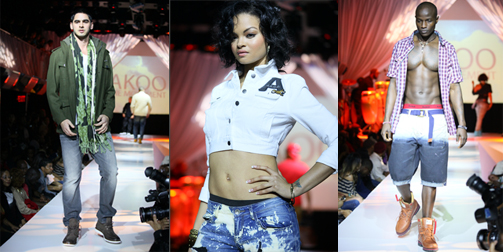 VIDEO: Behind the Scenes AKOO Clothing 2012 Spring/Summer Fashion Show as seen on “T.I. and Tiny: The Family Hustle”
(CLICK HERE to watch directly on YouTube)

The AKOO Clothing Spring/Summer Fashion Runway Show features styles from their men’s and women’s collection including footwear by Reebok Classics and designer electronics by Beats by Dre. Held at Atlanta’s premiere nightspot, Club Reign, the invite-only affair hosted a bevy of celebrity guests and prominent fashion insiders including Kalenna Harper of Diddy Dirty Money, Cynthia Bailey of the “Real Housewives of Atlanta,” and hip hop recording artists Yelawolf and Future.

“This fashion show is a very big moment for AKOO Clothing. We couldn’t be more honored to introduce our new women’s collection alongside our men’s line. It was also fun to get my children involved by walking in the runway show and performing on stage. I’m grateful for all the people who rock the brand and for partners like Reebok Classic and Beats by Dre who support the AKOO Movement,” states Clifford “T.I.” Harris, Owner of AKOO Clothing.

The awe-inspiring event was hosted by comedian and actor Kevin Hart, star of the upcoming film “Think Like A Man.” The fashion show also featured a surprise runway appearance by Rotimi, star of Golden Globe winning Starz original TV Series “Boss,” and special performances by recording artist Keri Hilson and the OMG Girlz.

“We put on an amazing display of exceptional style and fashion for our audience. We’re also very humbled by the enthusiasm and support of young Hollywood stars such as Rotimi who took time off from filming his TV show to walk in our runway show. The brand is definitely buzzing right now,” states Jeff Belizaire, Director of Marketing & Public Affairs for AKOO Clothing.

AKOO Clothing is the new American a fashion go-to brand for top fashion and innovation nationally and internationally. Global trendsetting celebrities, athletes, musicians, and actors have become fans of the brand including Larry King. Some of these prominent fans have even taken it a step further by aligning themselves and their projects with AKOO such as B.o.B., Curtis Granderson, Carl Crawford, Hosea Chanchez, Travis Porter, Tristan Wilds, Meek Mill, and Mickey Factz to name a few. AKOO has been featured in national print publications including VIBE Magazine and GQ, who also named AKOO’s founder T.I., one of the “10 Most Stylish Men in America” in their magazine issue.

AKOO, an acronym for A KING OF ONESELF, is a men’s contemporary clothing line that exudes a unique sense of elusive style that is versatile to one’s own lifestyle. The brand offers the highest quality of materials and craftsmanship including distinctive prints and fabrics that are unmatched from comfortable denim with custom embroidery, stylish leather jackets, detailed sweaters and durable lightweight tees as well as button downs and polos. AKOO, was founded by Grammy award winning artist, music and film producer, song writer and actor, T.I., and his business partner and Grand Hustle Entertainment CEO, Jason Geter. AKOO is manufactured and distributed by RP55 Group. AKOO is donned by celebrities including actors, musicians and athletes. The brand has been featured on TV, in videos, online, and in print media from around the world. The AKOO Clothing showroom is located at 230 W. 39th Street, 7th Floor, New York, NY, 10018.