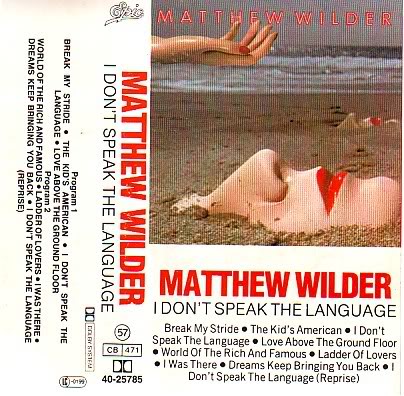 It’s nearly the end of February, and I’m starting to hit that wall on my new year’s resolutions.  Someone on Facebook asked me recently, what’s my secret to pushing through that wall?  Honestly, I don’t have one.  You’ve just got to want something more than you want to give up.  Music is a great source of inspiration in that regard.  As I’m dragging through today trying to make sure those end of the week loose ends are tied up in a nice bow, I found myself singing the chorus from the 80s song “Break My Stride” by Matthew Wilder, from his album “I Don’t Speak the Language,” on replay in my head.  It’s actually a song about a lost love, but the chorus applies equally to getting through heartbreak and moving on as it would anything else we might be pushing through in our lives.

Like I try to do for most of the Throwback Friday posts, I did a little homework on Matthew Wilder.  He’s had an amazing career beyond his 1983 “Break My Stride” pop-reggae song.  Matthew has been a singer, songwriter, producer and so much more over the years.  His name is behind Christina Aguilera’s break out hit “Reflection” that was featured on the Disney “Mulan” soundtrack.  Since then, he’s worked with numerous pop artists including Selena Gomez, Stevie Wonder, No Doubt, 98 Degrees, Kelly Clarkson and many more.  He’s also composed numerous songs for other films and TV series.  Recently, he’s worked on producing for the new band The Belle Brigade and writing the soundtrack for a Broadway musical adaption of the Anne Rice novel “Cry to Heaven.”

Check out this November 2011 “When Magazine” Blog Talk Radio interview with Matthew Wilder:

Listen to internet radio with When Magazine on Blog Talk Radio

“Break My Stride” certainly has continued to have a life of his own. It’s been covered by a wide array of artists over the years from Matisyahu to Diddy.  Here’s this week’s Throwback Friday song. I hope you add it to your playlists and remind yourself to keep the momentum going on those new year’s resolutions.

VIDEO: “Break My Stride” by Matthew Wilder
(trying to view from your phone? can’t get the video to work? CLICK HERE to watch it directly on YouTube).