You are here: Home / ifelicious tv / The A-List: Dallas / A-List Dallas’ Levi Crocker brings his voice and Inchwear to the rodeo circuit 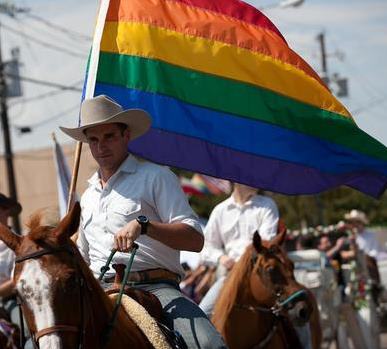 Last week, I spoke with Levi Crocker (Facebook, Twitter) from Logo TV’s “The A-List: Dallas” about what he’s been up to since season 1 aired.  Honestly, Levi is one of the most savvy entrepreneurs I’ve seen on the “A-List” series.  He’s about to embark on what will hopefully be an ongoing tour announcing IGRA (International Gay Rodeo Association) rodeos while also promoting his Inchwear underwear/swimwear/apparel line.

Phoenix area fans of Levi and rodeo, mark your calendars for February 17-19, 2012.  Those are the dates for the AGRA (Arizona Gay Rodeo Association) – Road Runner Regional Rodeo being held in Chandler, AZ.  You can purchase tickets on Levi’s Inchwear website (just click on the “TICKETS” link at the top of the page or CLICK HERE to be taken directly to the ticket purchase page).  Levi will be the announcer for all of the festivities.  To top it off, his company Inchwear is sponsoring the Goat Dressing event and will be the exclusive supplier of underwear to be used.  When asking Levi to explain goat dressing, he replied, “We have a couple of Camping Events that anyone can sign up to do…Basically, a team of two runs across the dirt, and they put their underwear on a goat.” Check out YouTube video footage below from a Goat Dressing event.  It looks super fun to me, and I hope to try it myself sometime.  Who wants to be my partner?

VIDEO: Goat Dressing AGRA 2008
(reading this from your smartphone? can’t view the video? CLICK HERE to watch it on YouTube)

Levi is excited to get into more rodeo announcing, and the Arizona rodeo will hopefully mark the beginning of his announcing more rodeos for IGRA.  He shared:

“The rodeo announcer is kind of like a revered position in the rodeo arena.  He’s at the show and filling everyone in…keeping everybody informed, talking about the event…the history…and how the event came about, and how it’s scored and stuff like that, but it’s usually like the dirty old man up there on the microphone that’s been…doing [it] for like 85 years.  It’s an awesome opportunity to develop something outside of club appearances…They’re interested in having me just trying to take a different route as far as getting people in their seats.  I told them if they don’t do anything different, the only thing they’ll have to worry about over the next 20 years is multiplying their handicap parking spots.  That’s what I’m hoping to change is the gap in their fan base.

I feel like rodeo can kind of be intimidating conceptually…People ask me all the time about rodeos and where’s a good one to go, and they’re really glad that I can come back and say, ‘I’m actually bringing one to your town.  Go check it out.  I’ll walk you through it.  I’ll explain everything you need to know and have a good time.’

I’ve been thinking about it since October [2011].  It’s whenever we filmed me announcing the world finals [on an episode of ‘The A-List: Dallas’].  They invited me to do that and it kind of clicked that I was in a position to turn a lot more people onto it, and it’s all finally coming to fruition.”

Levi is also rolling out his Inchwear print ad campaign.  Guess who did the photography for the ads?  Ashley Kelly (Facebook, Twitter, website)!!!  I nearly dropped the phone when I heard that, but at the same time, I’m glad he approached Ashley again given what when down on “The A-List.”  “Believe it or not, I wanted to touch that topic again and give her another shot as far as from a professional standpoint and just do something between her and I not association with production’s input [from ‘The A-List’],” said Levi.  “We’ll do a focused release in the city that the rodeo is going to…a couple of weeks before I show up [to] start spreading the word and get people out.

Inchwear will be launching a line of shorts this year.  I’ll share more details on that as things come together with Levi and his Inchwear team.  I also hit him up with some of my own questions that were still lingering since the reunion special hosted by Wendy Williams…Ifelicious style!  😉   I’ll save the post season gossip for another post.

Read all of my blog posts about “The A-List: Dallas” – CLICK HERE.