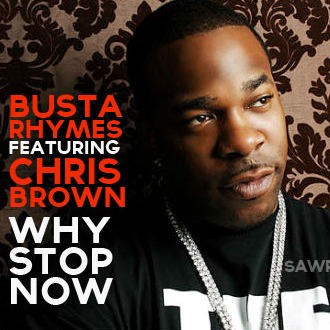 The “Look At Me Now” power duo Busta Rhymes (Twitter @BusaBuss) and Chris Brown (Twitter @ChrisBrown) partnered up again for the track “Why Stop Now” that was released back in November 2011.  The official video, directed by Hype Williams, is set to drop on January 30, 2012 at Noon (assuming that’s EST) via Google Music – CLICK HERE for the link to find it.  In the meantime, Google Music has left us a teaser by releasing some exclusive behind the scenes footage.  Check it out below:

At the same time that Busta inked the record deal with Cash Money Records, he also was one of the first artists to get on board with iTunes latest rival Google Music who is responsible for releasing this behind the scenes footage. In an interview with CNET News (“Busta Rhymes Q&A: ‘Winning’ with Google Music“), Busta talks about joining up with Google Music, “…being part of something like that is a milestone, and a turning point for me in my career. It says so much in so many different dynamics. I’m so proud of this alliance and this union and just being a part of the most powerful search engine in existence, and the fact that they are making such a conscious effort to provide and facilitate a platform for artists that gives us the empowerment and the strength for being that much more independently driven. It just really does a lot for the faith of the future of the music, not just creatively, but professionally.”

If you haven’t copped “Why Stop Now,” you can download it for free via Google Music – CLICK HERE.  “Why Stop Now” will be on Busta’s album “E.L.E. (Extinction Level Event) 2: End of the World” to be released later this year.  It reportedly leaked on MediaFire a few weeks ago, but I’m not sure what’s happened since then.