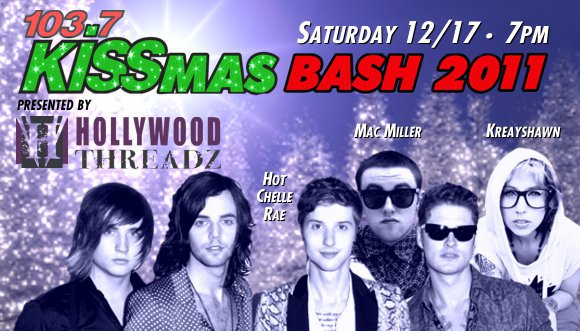 It was a sold out crowd on Saturday, December 17 for 103.7 KISS FM‘s 2011 KISSmas Bash held at The Rave in Milwaukee.  As an early fan of Hot Chelle Rae, that was my primary motivation for covering the event, but I also enjoyed Kreayshawn and headlining act Mac Miller.  The screams were high and the walls were sweating before it was all over, but everyone left having enjoyed a great concert. 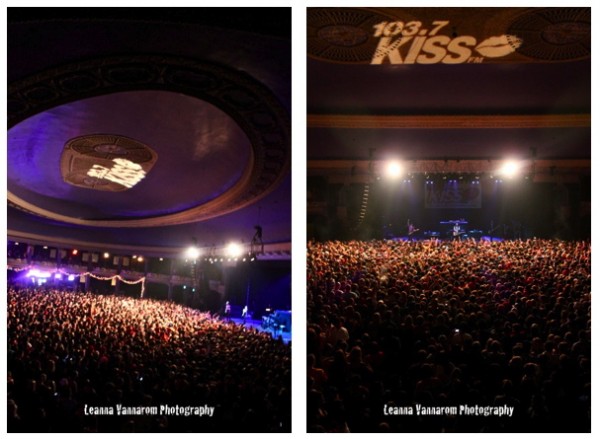 Awarded Sprint New Artist of the Year at the 2011 American Music Awards and a nominee for MTV’s Breakthrough Band of 2011, Hot Chelle Rae (HCR) continues to stay relevant in the pop/rock genre.  The group had some lukewarm hits on their debut album “Lovesick Electric” with “Bleed” and “I Like To Dance,” and then racked up over 2 million downloads for the single “Tonight Tonight” off their sophomore album “Whatever” released on November 29, 2011 on RCA Records. “I Like It Like That” is also garnering record spins.  The band members consist of brothers Ryan Follese (lead vocals) and Jamie Follese (drums) along with guitarists Nash Overstreet and Ian Keaggy.

The group last graced Milwaukee in August 2011 as part of the Friday is Forever Tour and returned last weekend for the KISSmas Bash on December 17th at The Rave.  I’ve been keeping my eye on this band since their early days so this was the headlining group from my perspective and the reason why I’m kicking off this blog post with their footage, although they performed 2nd (after Kreayshawn).  The crowd was much more alive this time around for HCR than when I saw them back in August and happy to sing along with songs which is always the highest form of fan flattery in my book.  All of the songs performed were from their new album with the exception of a cover Katy Perry’s “Teenage Dream” that they seem to keep on steady rotation on their tours.

HCR will be headlining for the first time on their own Beautiful Freaks Tour kicking off in Februrary 2012.  They have another tour stop at The Rave in Milwaukee on April 22, and hopefully RCA will stop dicking me around and finally grant me an interview with band (trust me, i’ve been trying!) so I can share it with you.

Milwaukee loves Mac Miller and he loves us back!  The KISSmas Bash marked this Pittsburgh-based, blunt smoking rapper’s second sold out performance in the Brew City.  I didn’t get hip to Mac Miller until he had a guest appearance on VH1’s scripted series “Single Ladies” as a hip hop artist, no doubt, that the character April discovered.  She pitches him to her record label hoping to land the A&R promotion she’s been vying for.  A shining example for the new landscape of indie artists, Mac released his debut album “Blue Slide Park” on November 8, 2011 and was a nominee for MTV’s Hottest Breakthrough MCs of 2011.

The crowd came to life unlike with any of the other performances that night when Mac hit the stage, and he performed a set was about an hour long.  You don’t see that much anymore from artists so that makes him a class act in my book.  He even took it old school for a bit during a segment about midway through.  The crowd was so pumped at the end chanting “Mac Miller” over and over like they were when they were waiting for him to take the stage, that he blessed the crowd with an encore performance before it was all over.

His set list was enormous, but I’ll come back and highlight some of the songs from his performance.

Don’t put down your blunts yet because concert kicked off with the weed hailing, bitch name tossing antichrist from Oakland, Cali known as Kreayshawn.  On stage she was joined by Lil Debbie from her White Girl Mob posse.  Her fashion sense is a little hip hop and a little punk, and her muses seem to be somewhere in the land of Nicki Minaj, Lady Gaga, and Amy Winehouse.  Honestly, I dig her.  Her music isn’t brilliant but it’s catchy/clever and makes for fun times out with your girls at the club.  I’ve got my eye on this gal who seems to be consistent with a style of female artists are continuing to surface.

If you missed her in Milwaukee, I’d say she’s worth checking out.  For list of tour dates – CLICK HERE.

Thanks to Leanna Vannarom Photography for help with taking photos for this event.