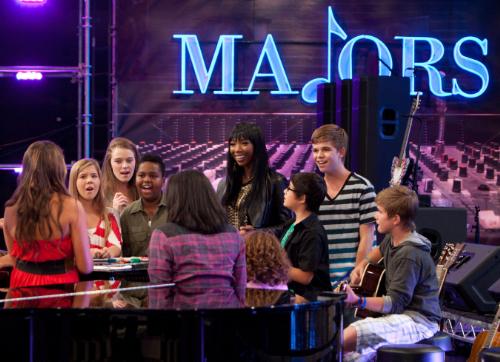 Over the course of the TV season, “Majors & Minors” follows the journey of 12 talented young performers, ages 10-16, as they are mentored by some of the biggest and most successful artists and coaches in the music industry. The Hub TV Network, a destination for kids and their families, is a joint venture of Discovery Communications and Hasbro, Inc. In addition, it was announced that TruMoo® chocolate milk will serve as a premiere season-long sponsor of the new series as part of its nationwide product launch and advertising campaign.

Each mentor will provide guidance to the gifted young cast as they begin their roads towards individual stardom. While no one is ever voted off, one lucky “star-in-the- making” will claim the ultimate prize of a recording deal with Boardwalk Records/RCA Records and an opportunity to be featured in a cross-country concert tour.

In the premiere episode, viewers are introduced to the 12 cast members as they participate in the nationwide casting call process along with more than 40,000 young hopefuls. Selections of the final 12 were made by some of the music industry’s top professionals. R&B singing sensation songwriter Brandy guest stars as the premiere episode reveals the back stories that led each of the kids to this point on their journey to their dreams. Brandy also serves as a series mentor and producer on “Majors & Minors.”

Majors & Minors” was developed and is executive-produced by Evan “Kidd” Bogart, the songwriting hit-maker for music stars Rihanna and Beyonce, and top TV producers Timothy Scott Bogart and Gary A. Randall. The show is produced for The Hub by Boardwalk Entertainment Group in partnership with Sony Music’s RCA Records and BMI.

THE HUB is a multi-platform joint venture between Discovery Communications (NASDAQ: DISCA, DISCB, DISCK) and Hasbro, Inc., (NASDAQ: HAS) with a goal of entertaining, enlightening, empowering and educating children and their families. The cable and satellite television network features original programming as well as content from Discovery’s library of award-winning children’s educational programming; from Hasbro’s rich portfolio of entertainment and educational properties built during the past 90 years; and from leading third-party producers worldwide. The Hub lineup includes animated and live-action series, as well as specials, game shows, and family-favorite movies. The network extends its content through a robust and engaging online presence at www.hubworld.com. The Hub rebranded from Discovery Kids on October 10, 2010, and reaches approximately 61 million U.S. households. The Hub logo and name are trademarks of Hub Television Networks, LLC. All rights reserved.

Boardwalk Entertainment Group is a multi-faceted production and media company encompassing film, television, music and technology. In addition to the music reality series Majors & Minors for The Hub TV Network, Boardwalk Television is in development on scripted and unscripted projects set up at various broadcast and cable networks, and is in development on its first feature film. Boardwalk Records is releasing albums from new and established artists, including Wallpaper. and ZZ Ward, whose LPs drop in 2012. The company also maintains strategic alliances with major music companies including Sony’s RCA Records, Bug Music, Inc. and BMI.

TruMoo® brings innovation to the dairy case from the Dean Foods (NYSE: DF) family of regional dairies from coast to coast. TruMoo, a reformulated chocolate milk with less sugar and no high fructose corn syrup, is available in schools, restaurants and retail stores across the country. To find coupons, TruMoo retailers, and a Switcheroo Calculator that compares TruMoo milk’s nutrition to other beverages, visit www.TruMoo.com or find the brand as “TruMoo Milk” on Facebook and “@TruMooMilk” on Twitter.