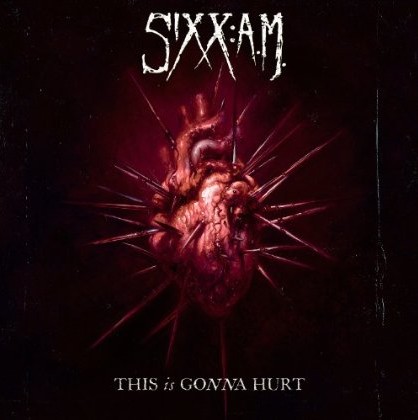 Les is the autographed CD winner by random drawing.  Check out his band website for Seven Ten Oil (www.seventenoil.com), too! Thanks to everyone for entering and keep visiting for more pop culture/entertainment news as well as freebies!!!  ~Ifelicious

I’ve been writing about Nikki Sixx’s “This is Gonna Hurt” on my blog and watching it explode in popularity.  His memoir “This is Gonna Hurt: Music, Photography, and Life Through the Distorted Lens of Nikki Sixx” released on April 12, 2011 via HarperCollins/WilliamMorrow debuted at #4 on the NY Times Bestsellers list (currently holds #9 position in the Hardcover Advice & Misc. category).  On May 3, 2011 Sixx: A.M. released the musical compliment to the memoir entitled, “This is Gonna Hurt” on Eleven Seven Music.  Since the memoir’s release date, Nikki Sixx has been on a book and media tour and will now include the album.  For the latest on tour dates near you go to nikkisixx.net, and watch for his upcoming appearance on HLN’s “The Joy Behar Show” on Tuesday, May 10, 2011.

Check out the lead single, “Lies of the Beautiful People” that’s already making noise on the rock charts.

VIDEO: Lies of the Beautiful People by Sixx: A.M.

Sixx: A.M. includes band members Nikki Sixx (bass), James Michael (vocals), and DJ Ashba (guitar). The band formed in 2007 and released a similar project to go with Sixx’s first book, “The Heroin Diaries.” The lead single from that album, “Life is Beautiful,” became the most played rock song of 2008.

Nikki Sixx shared the following in an interview with Vanity Fair:

Eric Spitznagel: This Is Gonna Hurt has its own soundtrack, which went on sale earlier this week. Is it just mood music, or do certain chapters line up with certain songs?

Nikki Sixx: The songs are really about the essence of the book, and they actually do belong together. The music was inspired by the words and by the photography, and that would inspire me to go out and write more words and create more photos. It became this back-and-forth thing between me and the other guys in [my band] Sixx: A.M. [Guitarist] D.J. Ashba would look at one of the photos I’d taken and that might inspire a guitar solo. It was an interesting cross-pollination of inspiration.

If you haven’t seen the 6-episode documentary series “This is Gonna Hurt: The Documentaries” on Hulu, it’s a must watch. Just CLICK HERE to go to the show page.

VIDEO: This is Gonna Hurt, the documentaries- Episode 5

WIN A COPY OF SIXX: A.M.’s NEW ALBUM “THIS IS GONNA HURT” AUTOGRAPHED BY NIKKI SIXX!!!

Keeping in line with the theme in “This is Gonna Hurt” and my previous book giveaway, to enter this contest leave a comment describing your most beautiful trait on the inside (i.e. kindness, big heart, sensitivity, straight-shooter/honesty, etc.).