You are here: Home / Beauty/Fashion / The Body Shop, UNAIDS, Annie Lennox ask you to be an activist, join the fight against HIV 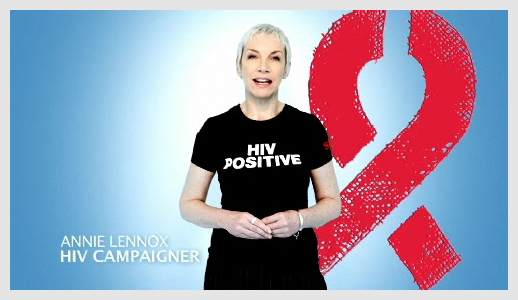 The Body Shop has teamed up with world-renowned photographer Rankin to launch an international HIV campaign, which invites you to be ‘an activist’ and join the fight against HIV. HIV knows no boundaries and to highlight this irrefutable fact, the campaign links everyday ‘activists’, people from all walks of life, captured by British portrait and fashion photographer Rankin. This campaign is in partnership with UNAIDS and serves as a timely reminder that being an activist means many different things – from taking to a podium and speaking out, to wearing the red ribbon on World AIDS Day and supporting the fight against HIV.

Rankin is best-known for his incredible photographs of people in the public eye, from Madonna and Kate Moss, to Her Majesty The Queen Elizabeth II. He is known for creating images that draw out the different aspects of each subject’s character, their personal nuances – and with a range of people involved in this campaign, he was the perfect choice for this campaign. 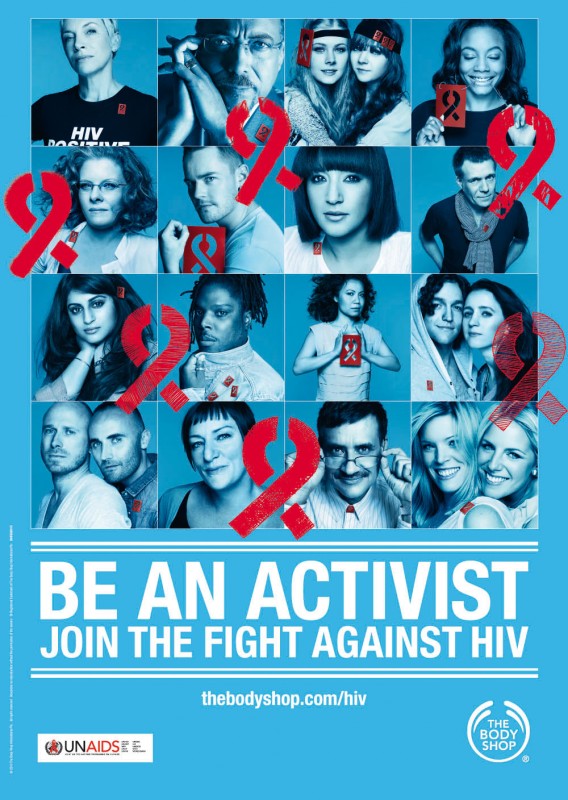 The number of people living with HIV worldwide continues to grow, with over 33 million estimated to be HIV positive. Rankin believes strongly in the campaign, creating images that will be shown in stores around the world. He says: “I think it is important to take a stand on something that has affected humanity so profoundly. HIV/AIDS is not going away. We need to constantly educate ourselves, not only on prevention and treatment, but understanding and empathy. It is still a relatively new disease, and although the last 20 years have helped reduce prejudice and dispel myths about HIV/AIDS, we have a long way to go.

We can not assume for a moment that we live in a world where acceptance and empathy prevail, so I just wanted to get involved to add my voice to the activists’ voices.”

The campaign highlights the power we each possess to take personal responsibility for our actions, by staying safe and protecting others. Michel Sidibé, Executive Director of UNAIDS, a leading authority on HIV related matters, was photograhed by Rankin, as was world-renowned singer and activist Annie Lennox, who shows her solidarity with those affected by HIV, photographed wearing a t-shirt that states simply “HIV Positive.”

This campaign calls on everyone everywhere to show ….your support and solidarity with those affected by HIV. You will see the visuals for this campaign herald a new take on the iconic design, with a stencil logo designed by the in-house The Body Shop creative team, now used in partnership with UNAIDS. Michel Sidibé says: “As we near 30 years of a world with AIDS, the fresh, new look of the red ribbon will help inspire the public and re-energize the movement to stand in solidarity with the more than 30 million people living with HIV worldwide.”

We asked Rankin to share his thoughts on the images he shot to support the campaign, as well as asking him about the professional achievements that make him feel the most proud:

How do you feel about photographing “real” people for this campaign, as you work so often with models and celebrities?

I always enjoy meeting new people. This project was really inspiring, as everyone had their own story to tell, but we all had a common agenda. It felt great to see so many people with so many different experiences getting involved in promoting the same message.  I love shooting models and celebrities, and they are often amazing and surprising people. But working with this group really was special, simply because they were all passionate, and all wanted to stand clearly for their cause.
You are known for so many different projects, but which piece of work are you most proud of – and what inspired you?

That’s a really tough question. I am a perfectionist and am generally very proud of the work I do. Being a photographer affords me amazing opportunities and is very rewarding.

I try to give something back, and the only way I know how to do this is through photographs. This HIV campaign is very important to me, and I hope that the images will help influence attitudes.  I also work on an on-going basis with Oxfam, trying to support their aid effort in Africa. I have visited the Democratic Republic of the Congo twice in the last 3 years to photograph people displaced by the conflict there. We held a couple of exhibitions and published a book, which helped raise over a million pounds. I know that the money raised will make a huge difference to the lives of the people I met, and I am very proud to have been part of that effort.

Which image from the shoot is your favourite?

I love my image of Phoebe and Sadie. They are gorgeous girls who suffered through the loss of their dad. He was an aid worker in Africa, and stood on a contaminated needle. They lost so much to HIV/AIDS, and I think their viewpoint is important to the campaign.

What did you wish to convey through the image of Michel Sidibé (Executive Director of UNAIDS)?

Michel Sidibé is a quietly passionate man. He is one of the most open and approachable people I have ever met. His sincerity, stature and kindness shine through in the image, so I feel like it is a success.

What did you wish to convey through the image of Annie Lennox?

Annie Lennox is an incredibly strong person and vocal about her viewpoint. There is nothing I could portray onto Annie. It all comes from her.  She is beautiful and passionate, and I love my image of her as she has projected all this in one simple shot.

How do you get your subjects to relax, to best convey their personality in your images?

I talk to people. It’s hard to get me to shut up actually, and I think just chatting really relaxes people. Simply asking someone to pose will make them instantly close down – it’s just a reflex reaction. I suppose if you feel like you are being examined, it feels safer to put up a wall. When that happens, it makes it difficult to see beyond the subject’s projected self to the real person beneath.  I try to look at a person beyond the image, chatting as I photograph them, and telling the occasional joke to keep it all light. It is the best way to bring personality to a portrait.

And finally, how do you think people could “be an activist – join the fight against HIV”?

I will wear a red ribbon on 1 December. HIV/AIDS must be acknowledged and we must be brave enough to face it with an open mind. The more people that make a stand, the better. They say knowledge is power, but empathy and compassion are the basis of humanity.

If we can promote both by being an activist, there is hope.

To find out more visit www.thebodyshop.com/hiv.

Rankin’s images can be viewed at a special World Aids Day Exhibition at City Hall in London from 11am Nov 29th until 5pm Dec 10th, 2010.