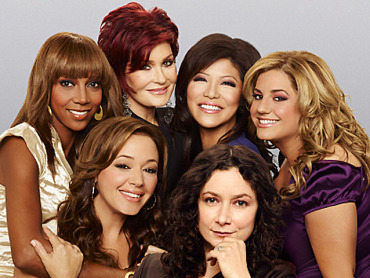 By chance, I caught part of the first episode of “The Talk” earlier this afternoon on CBS.  The idea was developed by Sara Gilbert (aka “Darlene” from the TV series “Roseanne”) and includes a panel of celebrity moms as the co-hosts: Julie Chen, Sharon Osbourne, Holly Robinson Peete, Leah Remini, Marissa Jaret Winokur as well as Sara Gilbert.  Each episode they also include a special guest.  Today’s guest was Christie Brinkley who was there for the segment “Supermodel to Super Mom.”  The ladies also talked about when is the right time to talk to children about sex and included the results of their online poll in the discussion.

The show is inevitably being compared to “The View.”  Julie Chen is kind of the Barbara Walters of the group, being the seasoned on air personality as the host of the CBS “Early Show.”  Besides that, the focus is actually very different as described in the press release:

The co-hosts—moms with children ranging in age from infant to adult—will swap stories, challenge each other on issues and engage the studio audience and viewers at home about events in the headlines and their own homes through the lens of motherhood.  Show segments will include guest interviews with entertainers and newsmakers, live remotes from the field and personal home footage shot by the co-hosts themselves.

Sara Gilbert has two children with her lesbian partner, and the birth of her second child is what prompted her to think about this show.  Regarding her lesbian relationship, Sara but says she’ll share that part of her life when it feels right.  In any case, I’m glad to see that there is some true diversity amongst the show’s co-hosts.  I’m also excited to see Holly holding it down for the black girls, and she’s been very active in autism education and awareness. I’ve also missed seeing Leah on a regular basis since her show “The King of Queens” ended.  They really gave her hell when she put on weight as the result of her pregnancy.  She’s since lost the weight, but Hollywood is simply unrealistic with the pressures they put on women to maintain a perfect weight, especially post childbirth.

Hopefully, there will be no tantrums and walking off like we’ve seen recently on “The View.”  😉  Seriously, I think this show has great potential.  I don’t have children, but I still enjoyed the girl talk that happens as well on the show.

The Talk airs at 2:00 PM ET/1:00 PM PT and CT on CBS. You can also watch it online.  It’s the perfect time for moms to put their littlest ones down for a nap and enjoy connecting with other moms by watching the show.  The remaining guests for their debut week include Jennifer Lopez, Melissa Rycroft, Chandra Wilson, and Jamie Lee Curtis.