You are here: Home / ifelicious music / Ghostland Observatory’s “Codename: Rondo” out Oct 26, US tour in progress 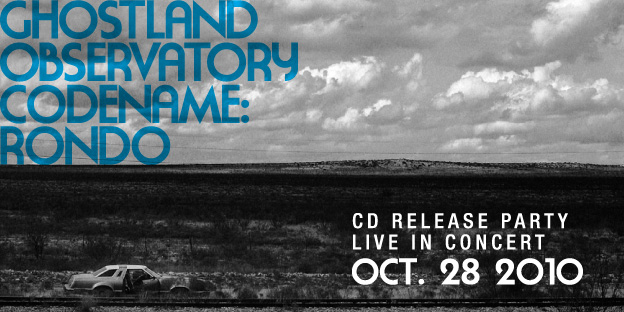 Ghostland put on an absolutely killer display, complete with the trademark Electro/Pop/Punk beats that leave you helpless against the desire to shake your ass. ~The Huffington Post

The fourth CD from Ghostland Observatory, “Codename: Rondo,” will be released on Trashy Moped Recordings/Sony Red Distribution on October 26th, 2010. Ghostland Observatory is not a band but an agreement between two friends to create something that not only heals their beat-driven hearts, but pleases their rock ‘n roll souls. They have been described as everything from “Freddie Mercury helms Daft Punk” to what you would get if “Rage Against The Machine mated with the Spice Girls.” One could say they are indescribably good. Essentially melding the distinct personalities of its two members – Thomas Ross Turner and Aaron Behrens – Ghostland Observatory continues to produce a style of music that exists first and foremost in their collective consciousnesses – Emile Durkheim would understand. It was recorded with what Turner calls a more linear approach, using fewer sounds while making each one count. The result is equal parts psychedelia, minimal electronic, rock, funk and soul. Indescribably good.

Ghostland Observatory have played major festivals including Lollapalooza, Bonaroo, Coachella and the Austin City Limits music festival, where they headlined. The duo’s legendarily electrifying live shows have captivated audiences across the country. In fact Spin Magazine has praised the two for being “a handful both on and offstage, rousing feet and bodies to their electro grooves.”

On September 2, 2010, they kicked off a tour in support of “Codename: Rondo,” the latest album in their collection of genre-bending music. The tour will take them across the U.S. and to the end of the year, giving their ever-growing league of fans ample opportunity to shake their ass. Coming to a town near you…

Catch a video sneak peak of “Codename: Rondo” below:

(MORE DATES TO BE ADDED)