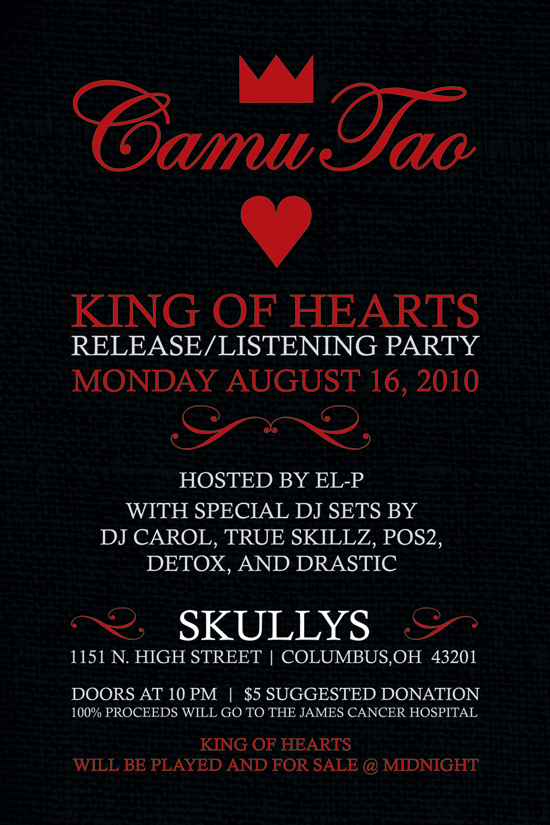 Two years ago, Columbus, OH native Tero “Camu Tao” Smith died after a grueling battle with lung cancer. He was a friend, a son, a brother, a groom-to-be and last but not least a brilliant producer, singer, rapper and entertainer.  Collaborator and friend El-P along with Camu’s fiance have arranged for an album release party for Camu Tao’s last work “King of Hearts” at Skully’s in Columbus, Ohio on Monday, August 16, 2010 beginning at 10:00 PM (see flier above for details).  The suggestion donation is $5 and proceeds will go to Ohio State University’s James Cancer Center. 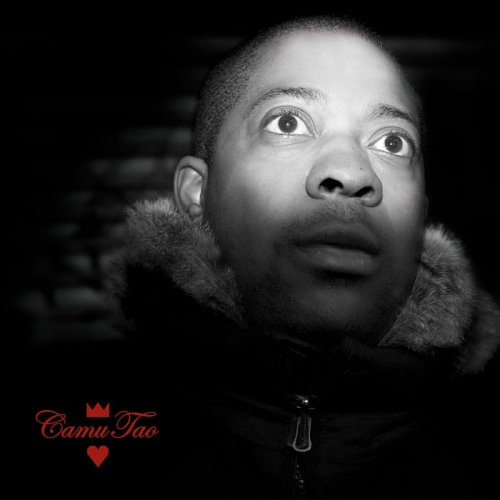 “‘King Of Hearts’ is essentially a collection of demos and unfinished songs Camu had created for his album. Some were recorded professionally, some were not. His sickness prevented him from finishing them all. We felt that the music, even in its raw form, was beautiful and needed to be heard. Camu needs to be heard,” said El-P.

“King of Hearts” will be released on August 17 through Definitive Jux in collaboration with Fat Possum.  Pre-orders available on www.definitivejux.net/kingofhearts/.  When pre-ordering, there are several options to obtain collectors items while supporting lung cancer charities in Camu’s honor.  There’s a “I Heart Camu” tee for $15 of which all sales will go to charity and there’s also a limited edition Camu Tao screen print.  Check the Definitive Jux website for more details.

El-P and Camu Tao (together as Central Services) completed a project back in 2005 that was previously unreleased until now.  The “Forever Frozen in Television Time” EP has been available for FREE DOWNLOAD.

Also, download the track “Plot A Little” from the “King of Hearts” album by CLICKING HERE.