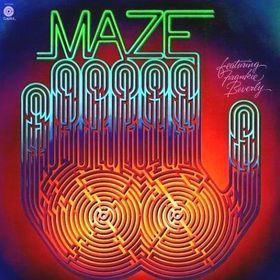 Yes, today is Biggie Smalls birthday, but I felt disingenuous dedicating my own Throwback Friday post to him since I was never a die-hard fan.  Instead, I picked a song that just touched me personally today.  I’m keeping it in the 70s like last week by choosing “Happy Feelin’s” by Maze featuring Frankie Beverly from the album by the same name.  This was after the group had been discovered in the Bay Area by Marvin Gaye who helped them get signed to Capital Records.

It’s funny, because all this time I just assumed that Maze featuring Frankie Beverly were from DC, but I’m realizing that it just may be the result of my hubby’s fascination with the group as well as their popularity that I recall in the DMV growing up.  Frankie, who changed his name from Howard to Frankie when he was 15 years old after the group Frankie Lymon and the Teenagers (how’s that for a factoid, eh? lol), is actually from Philly but never identified himself with the Philly sound of the time.  There’s some really great bio info on the group over on AOL Music.

Grab someone you love, move the coffee table out of the way, and get ready to “harmonize” and dance in the living room to “Happy Feelin’s.”

Enjoy!  … p.s. this version is 7 mins 11 secs.  Remember when songs had extended play and sounded good for every extra minute?  Good times, y’all.