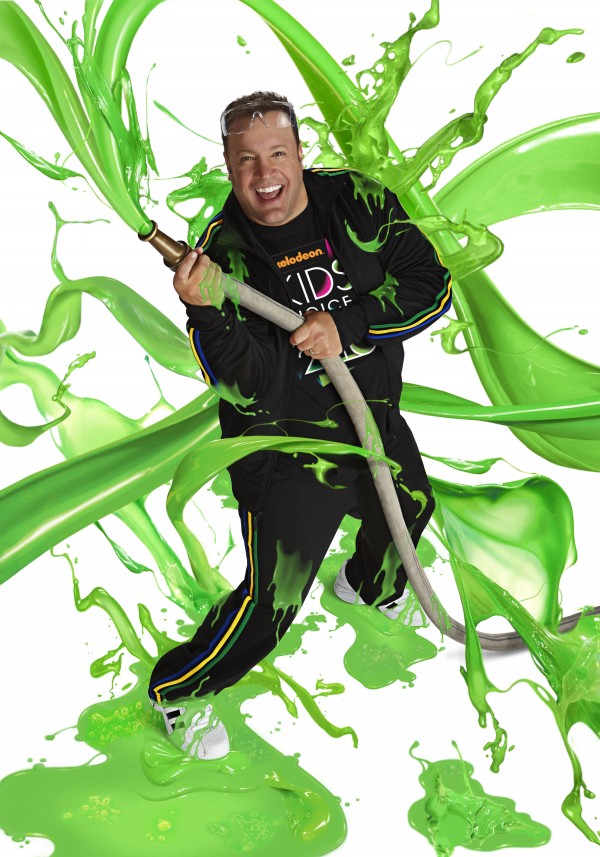 March 27, 2010, LOS ANGELES, CA — Mega-stars including Taylor Lautner, Miley Cyrus, Taylor Swift, Jim Carrey, Black Eyed Peas, Ryan Sheckler, Jay-Z, Selena Gomez and Misty May Treanor reigned as this year’s favorites, winning top honors at Nickelodeon’s 23rd Annual Kids’ Choice Awards live telecast, Saturday, March 27, (8-9:30 p.m. ET/tape delay PT). Hosted by funnyman Kevin James and broadcast from UCLA’s Pauley Pavilion in Los Angeles, kids’ top choices in television, movies, music and sports were revealed this evening via winners’ boxes that contained everything from a live animal, to a human hand, inflatable man and of course slime. The evening got off to a slime-filled start as Kevin James and Adam Sandler opened the show with their own rendition of “Get Slimed Tonight” while soaking the audience with the green goo. Later in the show, The Last Airbender’s Nicola Peltz’ magic “slimebending” got out of hand; Katy Perry, Steve Carell and Tina Fey were treated to surprise slimings; and American Olympian Apolo Anton Ohno set a world record by shooting 60 yards across a football field, via the Kids’ Choice Awards Slime Catapult, through the goal posts and into a vat of slime. In a special honor, The First Lady of the United States, Michelle Obama accepted the first-ever Nickelodeon Big Help Award for inspiring families to be healthy and active through her recently launched Let’s Move! initiative.

Kids paid tribute to their favorites by casting over 115 million votes February 25-March 27 in 19 categories. Votes were cast via http://www.nick.com as well as Nick’s mobile website (wap.nick.com) and new KCA iPhone app.

Orange blimps were presented to Taylor Lautner for Favorite Movie Actor, Miley Cyrus for Favorite Movie Actress, “Alvin and the Chipmunks: The Squeakquel” for Favorite Movie and Up for Favorite Animated Movie. Jim Carrey won top honors for Favorite Voice from an Animated Movie for his vocals as Scrooge and the ghosts of Christmas Past, Present and Future in “A Christmas Carol.” In the television categories, Favorite TV Show went to “iCarly,” Favorite Reality Show to “American Idol,” Favorite Cartoon to “SpongeBob SquarePants,” Favorite Television Actor to Dylan Sprouse and Favorite Television Actress to Selena Gomez. In music, top honors went to Taylor Swift for Favorite Female Singer and Favorite Song for “You Belong With Me,” Jay-Z for Favorite Male Singer and Black Eyed Peas for Favorite Music Group. Most valuable players Ryan Sheckler and Misty May Treanor won for Favorite Male Athlete and Favorite Female Athlete, respectively. “The Diary of a Wimpy Kid” series garnered Favorite Book and Mario Kart won for Favorite Video Game. Jacob & Bella (Taylor Lautner & Kristen Stewart) from “The Twilight Saga: New Moon” won for a brand new category this year, Cutest Couple, chosen last year by kids who were asked to submit their ideas for new favorites they would like most like to see added to this year’s show. In a new special category this year, the Ultimate Dance Smackdown was awarded to Nickelodeon stars Noah Munck and Matt Shively as voted by viewers during the live telecast.

Miranda Cosgrove and Keke Palmer presented First Lady Michelle Obama with Nickelodeon’s first-ever Big Help Award for inspiring families to be healthy and active through her recently launched Let’s Move! initiative. The award recognizes those who seek to better the world, and whose significant impact on their community has inspired kids to do the same. In a taped acceptance, the First Lady acknowledged it was an honor to receive the award and she encouraged kids to be active and take control of their lives and health.

Tonight’s presentation of the Big Help Award signaled the launch of Nickelodeon’s The Big Help “Millions on the Move” campaign (www.thebighelp.com), which aims to inspire a kid-led movement of positive change, focusing on four key issues that kids have identified as being important to them: the environment; education; health and wellness; and community service. As part of The Big Help, Nickelodeon will distribute $1 million in grants to fund The Big Help “Millions on the Move” projects in schools and communities across the country.

Nickelodeon stars and music group Big Time Rush introduced international superstar Rihanna who was joined onstage by a giant dancing robot as she rocked the house with a medley of her hits “Hard,” “Rude Boy” and “Please Don’t Stop the Music.” Teen-pop sensation Justin Bieber escorted one lucky winner from Nickelodeon’s “All Access Sweepstakes with Justin Bieber” contest to the awards this evening and had the audience singing along to his performance of “Baby,” from his just-released “My World 2.0” sophomore album.

The moves of the night went to Noah Munck (iCarly) and Matt Shively (True Jackson, VP) who won the live viewer vote during the telecast’s “Ultimate Dance Smackdown” competition. Three teams of Nickelodeon stars were in the running—each with a different style of dancing. Gage Golightly (The Troop), Robbie Amell (True Jackson, VP), Ariana Grande (Victorious) and The Penguins of Madagascar boogied to Bollywood music, while Ashley Argota (True Jackson, VP), Nick Purcell (The Troop), Leon Thomas (Victorious) and The Fairly Oddparents characters grooved to Disco, but it was Munck and Shively who got down to Hip-Hop with the Fanboy and Chum Chum characters who freestyled their way to the prize.

Special programming began early on Nickelodeon with Friday night pre-show segments starring BrainSurge host Jeff Sutphen and the cast of Nickelodeon’s newest series, Victorious. Nickelodeon then aired Top of the Hour Hits on Saturday afternoon hosted by the cast of Big Time Rush. Immediately preceding the awards show, Nickelodeon kicked off the big night with the “Countdown to Kids’ Choice!,” a pre-show telecast hosted by Lily Collins and Jeff Sutphen that captured all the action on the Orange Carpet and in the special KCA cyber lounge where stars were able to tweet and text about their experience on-site. iCarly star Miranda Cosgrove also performed her new single, “Kissin U.”

Nick.com served as the interactive second-screen experience for all things Nickelodeon’s Kids’ Choice Awards, giving kids an insider’s look at the entire live event and from the orange carpet, hosted by True Jackson, VP’s Ashley Argota and Matt Shively. Exclusive Nick.com webcams—also accessible through the KCA 2010 iPhone app—gave kids control of their viewing experience and celebrity tweets, and the site also featured interactive polls and real-time updates and photos from the event. The online experience also featured an audience meter that tracked audience reactions throughout the webcast. Highlights from the live broadcast are available at www.nick.com/KCA10 (NOTE: link was not valid when I checked).

Alvin and The Chipmunks: The Squeakquel

Favorite Voice from an Animated Movie

You Belong With Me (Taylor Swift)

Diary of a Wimpy Kid series

Nickelodeon, now in its 30th year, is the number-one entertainment brand for kids. It has built a diverse, global business by putting kids first in everything it does. The company includes television programming and production in the United States and around the world, plus consumer products, online, recreation, books and feature films. Nickelodeon’s U.S. television network is seen in almost 100 million households and has been the number-one-rated basic cable network for 15 consecutive years. For more information or artwork, visit www.nickpress.com. Nickelodeon and all related titles, characters and logos are trademarks of Viacom Inc. ( VIA, VIA.B).