You are here: Home / ifelicious music / The Smashing Pumpkins kick off “Record Store Day” on April 17 with new album pre-sale 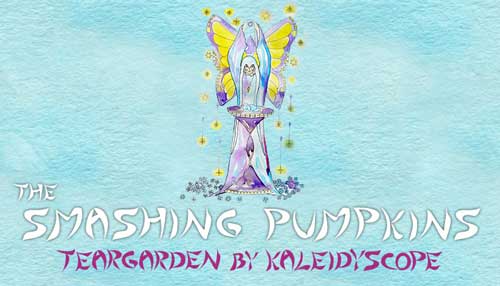 Exclusive pre-sale for the Smashing Pumpkins limited-edition EP “Teargarden by Kaleidyscope Vol. 1: Songs for a Sailor”

Coast to coast, fans visiting select local independent record stores on RECORD STORE DAY, Saturday, April 17, will have an opportunity to preorder the new, limited edition EP by the Smashing Pumpkins, “Teargarden by Kaleidyscope Vol 1: Songs For A Sailor.” The pre-order is exclusive to independent record stores. By preordering the EP, fans will be guaranteed to own the EP and will immediately receive a collector’s edition Smashing Pumpkins black light poster, while supplies last.

Says Smashing Pumpkins band leader Billy Corgan, “I used to work at an indie record shop so I’ll always have a soft spot for the places where I still go to find the most vital music, whether new or still hidden.”

Additionally, as part of the Record Store Day celebration, Rocket Science Ventures and Amoeba Music in Hollywood will present the Pumpkins’ fans with an opportunity to see an exclusive performance from the band. The first 250 fans who pre-order the “Teargarden…” EP on Saturday, April 17, will receive the limited edition black light poster as well as a wristband giving them entry into the Smashing Pumpkins performance from Amoeba and Urban Outfitters Space 15 Twenty later that day.

Director of Marketing for the Music Monitor Network and Record Store Day organizer Carrie Collition adds, “Many of Smashing Pumpkins’ fans, not to mention record store employees like myself, first embraced the band and their debut album, Gish, inside the walls of an independent record store. We are thrilled that Billy Corgan is publicly recognizing the part those stores played, and continue to play, in the Pumpkins story.”

The Smashing Pumpkins’ “Teargarden by Kaleidyscope Vol. 1: Songs for a Sailor” is set for official release on May 25th thru Martha’s Music / Rocket Science Ventures. This very limited edition collectors EP will be packaged in a beautiful collector’s silk-screened wooden box. Each box will contain a 4-song CD, a vinyl 7” and a hand-carved obelisk.