You are here: Home / ifelicious music / The Kottonmouth Kings to release “Long Live the Kings” on April 20 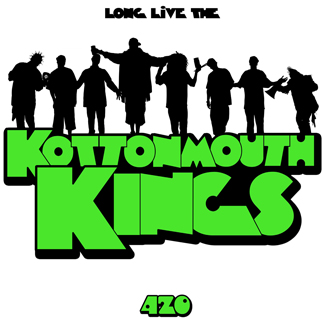 It is the dawn of a new era in the Kottonmouth Kingdom, and on April 20th, 2010, the Kottonmouth Kings will unleash their eleventh studio album “Long Live The Kings.” For the release of this epic recording, the Kottonmouth Kings have reinvented themselves yet again by adding the Dirtball, who joins the fold as a full-time member. Powered by the machine gun attack of his motor-mouth, Dirtball injects the group with a newfound firepower that takes the group’s sound into uncharted territories. Previously a solo artist who recorded for Suburban Noize Records, Dirtball’s ability to snap off raps with jaw-dropping results has forced critics to think twice about the capabilities of white rappers.

The group spent eight months in the studio producing over 45 songs to create the next chapter in the ongoing legacy of the Kottonmouth Kings. The end result is the next dimension in the group’s ongoing reign as kings of the underground. “Long Live The Kings” is propelled by the bounce of the album’s lead single “Stomp,” while “Rampage” runs some sonic destruction with the Kings’ trademark rip-hop sound. As always, the Kottonmouth Kings are on the front-lines in the fight for legalization and have recorded two new stoner anthems in “Reefer Madness” and “Let’s Do Drugs.”

The planets have aligned perfectly for the release of the Kottonmouth Kings’ new studio album, which coincides with the counterculture pot-smoking holiday observed each April 20th. The album’s mind-bending mixture of hip-hop, punk-rock, and melodic acoustics will surely be the soundtrack to countless bong rips throughout this year’s stoner holiday.

May 17th Charlotte, NC – The Uptown Amphitheatre at The Music Factory

May 21st Worcester, MA – The Palladium

May 26th Minneapolis, MN – The Cabooze