You are here: Home / ifelicious music / Taylor Hawkins and the Coattail Riders to release “Red Light Fever” on April 20, 2010 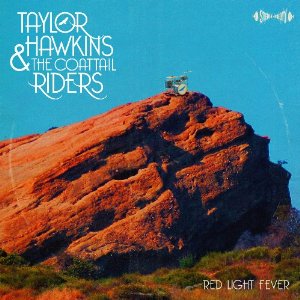 Second album From Foo Fighters’ drummer and friends out April 20, 2010 on Shanabelle/RCA.

A year in the making, the second effort from Foo Fighters‘ Taylor Hawkins and his Coattail Riders, “Red Light Fever,” is now scheduled for an April 20, 2010 release on Shanabelle/RCA Records.

Hawkins began demoing tracks on his own when an early 2009 break from the Foo Fighters’ grueling touring schedule finally freed up the time. According to Hawkins, who of course provides drums and vocals on all tracks among other additional instrumentation, “About halfway through, I just said f**k it, I don’t care if the record ends up sounding like me having sex with my record collection. I’m just going to have fun with it.”

The record soon went from a home recording project like the Coattail Riders’ 2006 debut (which was recorded in Foo Fighters touring percussionist Drew Hester’s living room) to full on sessions at the Foo Fighters’ state of the art 606 studio complex. Hawkins was joined by returning Coattail Riders Chris Chaney (bass) and Gannin Arnold (guitar) and, for the first time in the studio, touring Coattails guitarist Nate Wood. As the record’s dozen songs were fleshed out, so too was its stellar supporting cast, which would eventually come to include Elliot Easton of the Cars, Brian May and Roger Taylor of Queen, and last but by no means least, Hawkins’ bandmate Dave Grohl.

Red Light Fever could be considered a labor of love – if the sheer joy exuded in every note, influence and nuance of every song didn’t make the entire affair seem so effortless. Hawkins’ increasingly accomplished vocals and world renowned drumming skills recall and pay tribute to Hawkins’ vast spectrum of classic rock heroes – from the vintage 70s glam stomp of “Way Down,” the hard rock rave up “Not Bad Luck,” a nod to Beatlesque balladry in the form of “Hell To Pay,” and many more. Virtually every track evokes memories of the respective heydays of the Chinn-Chapman hit factory, The Move, Sweet, and even a little 10cc for good measure – all imbued with Hawkins’ unmistakable musical personality.