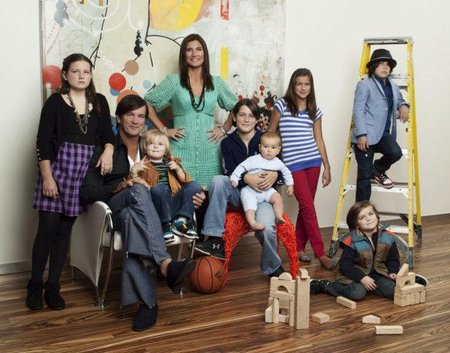 NEW YORK – March 1, 2010 – Meet husband and wife design team Bob and Cortney Novogratz, owners of the NYC based design firm, Sixx Design, and stars of Bravo’s newest docu-series “9 by Design.” For more than a decade, this young, hip and artsy couple have developed and designed unique properties in Manhattan, rebuilt entire blocks in the city, and turned funky into fabulous with taste and confidence. In any given week, the duo face daunting construction challenges against rapidly ticking clocks, create sumptuous spaces from wrecks and empty lots, and then decorate the spaces with rare and inspiring collectables. The eight-episode new series premieres Tuesday, April 13 at 11 p.m. ET/PT and moves to 10 p.m. ET/PT on Tuesday, April 20 on Bravo.

Renovating and selling houses is a challenging business, but as Cortney says, “we are risk takers, we look at places no one else would ever dream of looking at.” Overall, the risks have paid off, but Cortney adds, “it’s the ugly times that are the most exciting and the most fun.”

The series follows the couple over the course of six months, during which they worked on six large-scale design projects including a 24-room hotel on the New Jersey Shore called The Bungalow Hotel, a 10,000 square foot glass house on Manhattan’s West Side Highway and a home conversion of a gun shop located on the edge of Soho.

Both hailing from large Southern families, Bob and Cortney shared the desire to have a lot of kids and are parents to seven children – Wolfgang, 12, twins Bellamy and Tallulah, 10, Breaker, 8, twins Five and Holleder, 4. At the close of the premiere episode, Cortney goes into labor with the newest addition to the family, a son, Major. New York City may not be the typical place to raise a large and growing family, but for the Novogratz family there’s no place they’d rather be.

In the premiere episode, the series introduces this large family – two parents, six kids and one on the way – who are residing in a downtown two bedroom while waiting for their latest renovation project to be finished. Space is cramped for the family at the moment, but the team comes together as they embark on yet a new chapter of their lives with a new baby on the way, a new home being renovated and new projects on the horizon.

The series also will give viewers useful advice for their own lives. The couple utilizes their signature mix of vintage and modern, and purchase items that are both high and low end. For example, a treasured family heirloom can be paired with a new piece from Ikea. Or maybe an old coffee table can be painted hot pink and make a fun addition to a girl’s bedroom.

Bob and Cortney started renovating run down urban facilities in New York City in the early 1990s. With little funds, they renovated a space in the then up and coming Chelsea neighborhood. Musician Suzanne Vega offered to rent the property at three times the mortgage, and with their first son Wolfgang now in tow, Cortney and Bob took the deal and moved on to bigger and better opportunities in the city. While living in a two bedroom apartment as they renovated their second property, the couple welcomed Bellamy and Tallulah. Upon finishing their second renovation, Cortney and Bob realized that they had a true knack for creating dream homes out of wreckage, and their family business was born. A couple renovated houses later, son Breaker was born, quickly followed by Five and Holleder.

The premiere season of “9 By Design” was produced by Left/Right Inc., with Ken Druckerman and Banks Tarver serving as executive producers.