I’ve been meaning to check out this web series since learning about them on Twitter, and I just watched the first 6 episodes of “Buppies” online.  My feelings toward BET’s television programming has been lukewarm at best, so I didn’t expect much from this web series either; however, I’m pleasantly surprised.  “Buppies” has a fun little storyline and good character development to leave me waiting for more.  Starring Tatyana Ali and set in Black Hollywood, it’s kind of like a black version of MTV’s “The Hills” although it’s completely scripted and packed into approximately 3 minute episodes (perhaps “The Hills” should try editing down to 3 minutes. LOL).  There are 10 episodes in all, so if you haven’t been watching, it’s super easy to catch up before the remaining 4 seasons air (http://buppies.bet.com/videos/).

There was some buzz back in May/June 2009 about Tatyana Ali and her sister Anastasia Ali filing, of HazraH Entertainment, a lawsuit against “Buppies” creators and business partners Julian Breece and Aaliyah Williams, of Game Theory Entertainment,  for the $45,000 they invested in the show. Recent reports, however, indicate that the suit has been dropped.

Below is a press release from BET Networks regarding the show.  Check my Related Links at the end of the post for more about the show and characters… 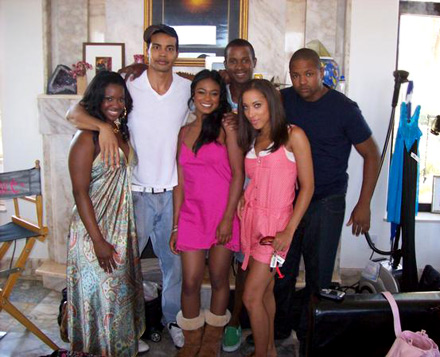 NEW YORK, Nov. 18 /PRNewswire/ — BET.com will debut the much buzzed about web series BUPPIES on Tuesday November 24th for a ten-week run. Set in the glitzy and glamorous world of the Black Hollywood, BUPPIES chronicles the relationship dramas of a group of slightly dysfunctional but inseparable friends as they navigate the tricky terrain of L.A.’s young black power elite. The groundbreaking web series is the first of its kind to feature an African-American principal cast, and stars actress Tatyana Ali as Quinci Allen (“The Fresh Prince of Bel-Air,” “Young and the Restless”).

“We’re very excited to have this dynamic web series shown on BET.com. BUPPIES is a great extension of the existing content and overall digital platform, satisfying users on a whole new level,” commented Denmark West, President of BET Digital Media Group. “Additionally, Tatyana Ali is an amazing actress with undeniable talent. She brings a fresh, relatable element to our site, and we’re happy to work with her.”

Episode one (watch above) finds Quinci, the socialite daughter of a Hollywood celebrity, trying to recover from the loss of her father and being dumped by her basketball star fiance. In what ends up as a misguided attempt to cheer her up, Quinci’s friends throw her a big birthday celebration that unfolds into a compelling series of personal dramas and deep secrets that create the heart of this fascinating series.

BUPPIES was created and produced by critically acclaimed filmmakers. Creator, writer and director Julian Breece‘s first film was an official selection of this year’s Sundance Film Festival. Just this year, he and his producing partner, Aaliyah Williams, were highlighted as part of IndieWire‘s “Top 10 New Voices in Black Cinema.” Their production company, Game Theory Films, produced the series along with Tatyana Ali and her sister Anastasia’s production company HazraH Entertainment. Tatyana Ali serves as an Executive Producer of the series along with producers Aaliyah Williams and Anastasia Ali.

Beauty brand CoverGirl has signed on as the inaugural sponsor of BUPPIES.

Tatyana Ali is a Broadway-trained actress, singer, artist and honors graduate of Harvard University. Audiences best recognize the New York native as Ashley, the youngest child in the Banks household on NBC’s hit comedy, The Fresh Prince of Bel-Air. She most recently appeared on Steven Spielberg’s reality show On The Lot and currently can be seen on CBS’s The Young and The Restless.

Trained at Second City and Improv Olympic Robin Thede has been seen on numerous TV shows, including “Chocolate News” (Comedy Central), “Kath & Kim” (NBC), “Worst Week” (CBS) and “All of Us” (UPN). She is frequently seen on E! News Daily as a freelance reporter and heard on Jamie Foxx’s Foxxhole on Sirius Satellite Radio (Channel 106) as a co-host on “The Voice of Reason.”

Ernest Waddell is a NYU theater-trained actor whose television credits include Law and Order Special Victims Unit, HBO’s The Wire, and One Tree Hill. He is also an abstract painter and musician.

Preston Davis has appeared in several television and film roles and currently has a recurring role on HBO’s hit series, “Entourage.” A Los Angeles native and graduate of Louisiana State University, Davis also stars in the upcoming films, “The Brotherhood V: Alumni” and “The Prankster.”

Chante Freirson’s acting career straddles television and theater starting with recurring roles on NBC’s hit A Different World and the Broadway production of Rent. She was most recently been seen in the San Diego Musical Theater production of Dreamgirls.

BET Networks, a division of Viacom Inc. (NYSE: VIA) (NYSE: VIA.B), is the nation’s leading provider of quality entertainment, music, news and public affairs television programming for the African-American audience. The primary BET channel reaches more than 98 million households and can be seen in the United States, Canada, the Caribbean, the United Kingdom and sub-Saharan Africa. BET is the dominant African-American consumer brand with a diverse group of business extensions: BET.com, a leading Internet destination for Black entertainment, music, culture, and news; CENTRIC, a 24-hour entertainment network targeting the 25- to 54-year-old African-American audience; BET Digital Networks – BET Gospel and BET Hip Hop, attractive alternatives for cutting-edge entertainment tastes; BET Home Entertainment, a collection of BET-branded offerings for the home environment including DVDs and video-on-demand; BET Event Productions, a full-scale event management and production company with festivals and live events spanning the globe; BET Mobile, which provides ringtones, games and video content for wireless devices; and BET International, which operates BET in the United Kingdom and oversees the extension of BET network programming for global distribution.