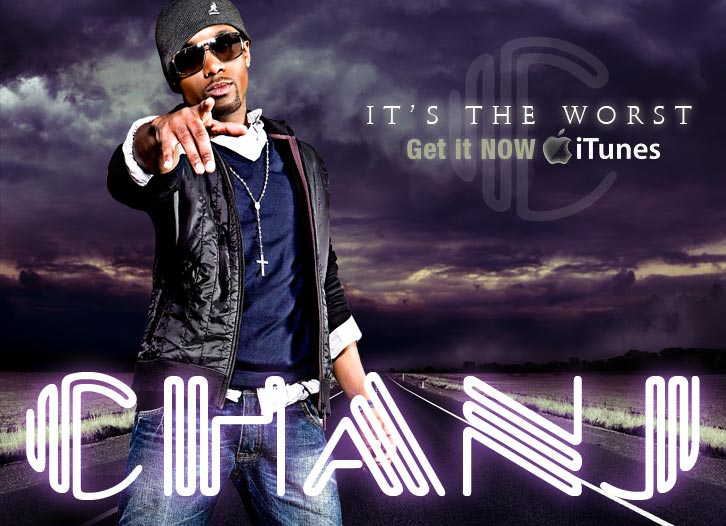 The lead radio single, “It’s The Worst” produced by Steven Russell (Jordin Sparks “No Air”) features a powerful and emotional delivery from Chanj and talks about those times when you’ve have both the best and worst of situations in life. When it’s simultaneously so good and so challenging, “It’s The Worst.”

“It’s The Worst” is catching the attention of radio across the nation. The song quickly began picking up spins upon it’s servicing, and is now in rotation in several different markets before an official impact date has been announced. “It’s The Worst” has also been named WBLS’ (#1 Urban AC station in New York City) song of the week. The vocal-styling’s of singer/songwriter Chanj has hit the airwaves with a breath of fresh air and will undoubtedly usher in a Time For Chanj.

The It’s The Worst EP also features the infectious buzz single, “Maybe” produced by Dre & Vidal (Usher, Mariah Carey, Jill Scott). The song serves as a memorable mid-tempo groove with a repetitive call out hook. The newcomer simply states, “Things are about to change…for me and for music. I am using my gift to craft a new release that speaks for and from the heart of a young man, his emotions and his insights.”

ABOUT CHANJ
Chanj hails from Plainfield, NJ and is a 4-time “Showtime At The Apollo” grand-prize winner. After performing his rendition of Floetry’s hit song, “Say Yes,” the singer cemented himself as a crowd favorite and became an instant YouTube sensation. Upon winning the Apollo Grand Prize, Chanj inked a deal with the newly formed label Alistair Records. Chanj quickly gained a grassroots buzz that has already captivated and engaged a celebrity and musical-elite following, such as Teddy Riley, who exclaimed — “Chanj is the truth! I haven’t heard or worked with a voice like his in years.” Teddy Riley was so impressed with Chanj’s talent; he decided to take him under his wing throughout the entire recording process. Since hitting the scene, Chanj has been invited to perform at several high profile events, including Apollo’s 75th Anniversary with Mariah Carey, Patti LaBelle, and Prince, BET’s exclusive awards dinner hosted by BET’s President Debra Lee with Jamie Foxx, Trey Songz, Chaka Khan and more!

His debut album Time For Chanj, is scheduled for release later this year.

For More Info On Chanj…

(Thanks to Simone Smalls PR for this press release)